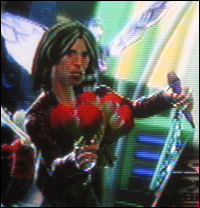 Players who purchase the maracas peripheral can unleash this scene's awesome power.Aerosmith's performances recreate their favorite gigs. Oddly, they select the 2001 Super Bowl Halftime Show, during which they shared an 11-minute set with 'N Sync and Britney Spears. (For some reason, those pop heroes don't appear as unlockable characters.) Incidentally, here's the best sentence from an MTV press release about that performance: "Styx will perform 'Come Sail Away' as pirates enter the stadium on a mock ship during a portion of the show that won't be televised."

Aerosmith wins points for including its only decent songs and disregarding its sappiest ballads. However, many of the featured tunes could be charitably described as "for fans only." "Nobody's Fault" stabs at power metal, with Tyler attempting to wail like Dio. "Bright Light Fright" (with Perry on vocals) sounds like really trashy glam, as does "No Surprize," which blows as much as you might expect from a song in the "spelling shit with a z" category. Early-career yawners such as "Uncle Salty," "Make It" and "Movin' Out" suggest Aerosmith would've played generic boogie-blues forever if its label deal hadn't opened the door to copious mind-altering drug use. By including a diverse sampling of buried album tracks, Aerosmith appears to be saying "you might think you know us from that crap on the radio, but check it out, we can suck in ways you hadn't even imagined!"

Guitar Hero: Aerosmith uses traditional motion capture to recreate Tyler's spastic shimmies, and facial capture to reproduce every grotesque expression. Perry's hands often appear to be on fire, perhaps because they're doused in Rock Your World Hot Sauce. The background sets, using props from Aerosmith album covers, look pretty interesting, though they're no consolation for enduring Aerosmith songs that are as boring to recreate on a controller as they are to hear passively. It's like admiring a car's sleek appearance, putting the key in the ignition, and having it lull you to permanent sleep by leaking carbon monoxide through the vents. 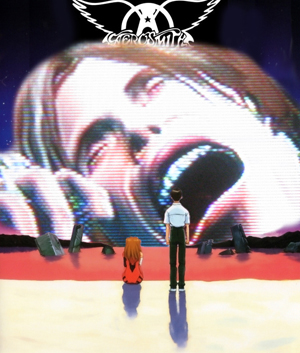 The end of Aerosmith.So, who will buy Aerosmith: Guitar Hero? Guitar Hero fanboys, who will treat it like the collectible figurine of a lame character, necessary for set completion but hidden behind its prominently displayed, fully action posed peers. And Aerosmith die-hards, who've already purchased multiple greatest hits collections and live albums -- and don't forget Honkin' for Bobo! There's no incentive for anyone who's not an obsessive fan of the band and/or the franchise to play this game, let alone purchase it. The sales spike Perry cites occurs for classic-rock songs reaching new audiences as part of an expansive track list, but it's unlikely these converts will want to pay $50 for a claustrophobic all-Aerosmith experience. It's hard to see how Guitar Hero: Aerosmith justifies either the band's optimism about video game manufacturers as the new record labels or Activision's commitment in devoting considerable resources into animating Steven Tyler's undulating wrinkles. The single-group trend might not die with this dud, but in more promising news, it appears video game consoles might actually respect the long-violated "do not resuscitate" order regarding Aerosmith's career.