U2: The World's Biggest Band

U2 has been dubbed "The World's Biggest Band," which means the group has serious flaws. Most people are idiots, so if millions of them like your music, you're probably doing something wrong. If you willingly accept or pathetically covet (Weezer, Coldplay, The Killers) the "Biggest Band" crown, you're more than likely a self-inflated shit blimp begging for puncture. Also, U2 has won 22 Grammy Awards, which demonstrates how much it has impressed the one subset that's even stupider than the general population. 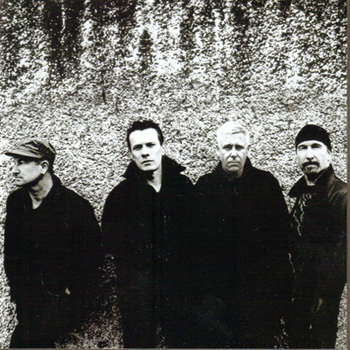 Wow, that guy's getting old! Not Bono. Not The Edge. That guy.

I don't really have anything against U2: They wrote a few decent songs 25 or so years ago, and Bono sold the line "thank God it's them instead of you" like a champ during that charity tune. I certainly don't have anything for them, either. Nonetheless, I decided to give No Line on the Horizon a couple listens to find out what a "five-star masterpiece" by "The World's Biggest Band" sounds like. Apparently, Bigness provides a four-star boost.

My introduction to No Line came in the form of "Get on Your Boots," which promises to retard-wrestle Third Eye Blind's "Non-Dairy Creamer" for Worst Single of 2009. After borrowing a riff from Sonic Youth's "Dirty Boots" for 2004's "Vertigo," U2 finally got around to swiping part of that song's title, but this time they stole the music from Escape Club's "Wild Wild West." Wikipedia claims "Wild Wild West" is "revered at singles dances and country line dancing circles as the music to which couples dance the Barn Dance." As the Biggest Band, U2 must stage a coup and inherit this hick demographic, downgrading Escape Club from obscurity to non-existence. Bono should organize a benefit concert for groups that have been usurped and/or burgled by Bono. 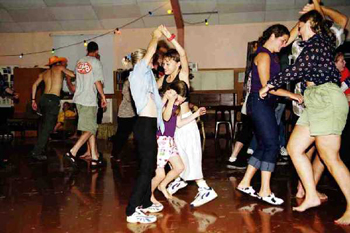 Get on your boots -- your cowboy boots! Yee-haw!

The savvier No Line defenders dismiss "Boots," calming traumatized listeners by saying "don't worry, the rest of the record doesn't sound like that." This is true, because much of the album consists of forgettable electro-pop meandering instead of sleazy '80s rock. But don't take false comfort in this distinction, because "Boots" isn't even the worst track.

That would be "Unknown Caller," during which U2's members chant "Reboot yourself" and "escape yourself" in robotic unison. Thanks, U2! Your group-droned inspirational slogans really helped me conquer a bad case of office malaise! Then there's "Breathe," during which Bono spouts putrid beat poetry lines like "I wasn't gonna buy just anyone's cockatoo." This asshole knows he can just blab anything and have morons proclaim it genius. If anyone's buying cockatoo, it's U2 fans. Finally, hearing "Stand Up Comedy" is like enduring a few minutes of its titular "entertainment" - fucking excruciating. It sounds like someone stole funk riffs from the pocket of Lenny Kravitz's tackiest fur coat. 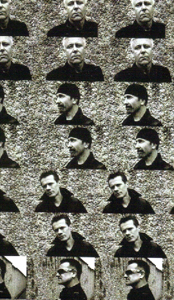 The legendarily modest Bono accepted one row while his bandmates received two.

Lyrically, No Line establishes what U2 apologists might call "conceptual coherence" and I'll define as "numbing redundancy." The word "heart" appears prominently in 8 of 11 tracks, while "love" dominates 6: Even the most vapid pop outfits tend to show more restraint in rationing their keywords. Somehow, Bono saves room for the following:

Nautical sexual euphemisms!
"You can hear the universe in her sea shells"
"I got a submarine/you got gasoline"

Tautological phrasings galore!
"Who can forgive forgiveness?"
"I'll go crazy if I don't go crazy tonight"
"Playing with the fire until the fire played with me"

No Line's final track "Cedars of Lebanon" careens between somber spoken verses and torturous falsetto yowling. It ends, with bizarre abruptness, right after Bono says of enemies "They're not there in the beginning, but when your story ends/ Gonna last with you longer than your friends." It's my favorite part of the album, not only because it means it's unceremoniously over, but also because it prophesies an enlightened era when even the World's Biggest fan base will be outnumbered by "enemies" with better taste.