4) Theory of a Deadman 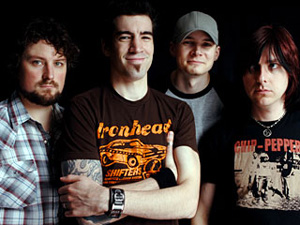 Theory of a Deadman smuggled Nickelback's Chad "Gay Jesus" Kroeger a demo tape, and Kroeger promptly finagled them onto his label and produced their debut album. He must have been thrilled to learn there was a Canadian sleaze-grunge band just like his, only somehow worse, that could serve as a protective buffer during the next projectile barrage.

Theory of a Deadman's "Bad Girlfriend," this year's "Crazy Bitch" sing-along for self-hating trollops and the depraved misogynists who lust after them, opens with the line "my girlfriend's a dick magnet." This once-spake-in-history sentence demonstrates that innovation (of the "new low" variety) remains possible even in a genre that's been strip-mined for stupidity since the '70s. The song's derivative riffs defame the memory of The Cult's "Fire Woman," while the lyrics degrade women, fiery and otherwise. Tyler Connolly, whose smug-cock face is the ultimate fist magnet, sings about the "Bad Girlfriend" being "naughty to the end," perpetuating Nickelback's trend of using that word constantly in a pathetic attempt to establish bad-boy credibility. Bands that abuse "naughty" must be punished, not in the S&M sense, but in the "violent death" way.

The "Bad Girlfriend" might be a hair-pulling, drug-binging, red-thonged gold digger with peni haphazardly stuck to her body like refrigerator Garfields, but Connolly endorses her debauchery, letting her off with public humiliation. The girlfriend from "Little Smirk" isn't so lucky. After Connolly catches her with some other asshole, "wearing nothing but a little smirk," he burns her clothes, steals her car (with her baby in the back seat) and runs up her credit cards. This makes sense ("karma, bitch!") to the group's average fan, the kind of cretin who would probably shoot off a toe in frustration if his foot fell asleep, but infidelity doesn't stand up in court as an excuse for kidnapping, arson and identity theft. Well, maybe in Canada.

"Hate My Life" reveals the one group that ranks even lower than women in Theory of a Deadman's hierarchy: Homeless people, those fucking overcompensated mooches. "So sick of the hobos always begging for change/I don't like how I gotta work and they just sit around and get paid," the song begins. In a time of economic distress, it's always comforting to hear someone with society's least justified job (shitty soul-patched musician) callously bitching about his superiority to the unemployed. Perhaps homeless advocates can arrange an exchange program in which Theory of a Deadman's members languish in squalor while random vagabonds train for the opportunity to perform terrible ballads for drunken morons. This program would be worthwhile solely for giving the bums a shot on stage: Theory of a Deadman's members should be destitute soon enough. 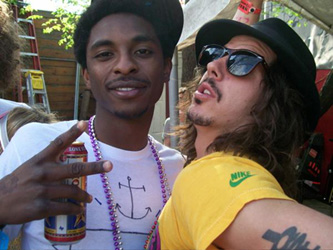 Cisco Adler has already headlined two MTV/VH1 vehicles, both of which were canceled after a few episodes due to abysmal ratings: The Rock Life, which followed his "party band" Whitestarr, and Buzzin,' which purportedly documented Shwayze's "long, winding road to reach the top of the charts." Apparently, reality-TV fans, shit-gorgers that they are, draw the line whenever this unwashed travesty appears on the screen. I'd like to see him contaminate as many reality shows as possible, starting with ex-girlfriend Paris Hilton's British Best Friend, so he could serve as death-bringer for the entire genre.

Shwayze, the group's alleged rapper, composes lyrics as spontaneously and coherently as any drooling invalid you might find in the most depressing corner of a nursing home. Trying valiantly to spin this damningly idiotic clip, MTV stammers "freestyling's not exactly his forte, but we give him an A+ for looking pretty cute while trying." Surely he can't be any worse when he actually takes time to prepare his raps in advance, right?

"When the moon is full, I'll be a wolf
Howl at you and growl at you
Ladybugs and flowers, too
I wanna go out with you"

Stretching acrobatically to make Shwayze seem appealing, an MTV blogger confesses a crush on Adler. "Have you noticed that he's never not smiling," she queries, her hapless double-negative phrasing establishing her as a Shwayze-caliber wordsmith. "Happy and sweet are totally the new dark and brooding." To the right is Adler's default photo face, which doesn't say "happy and sweet" so much as it screams "repugnant asshole drinking himself to death because he's secretly aware of his musical shortcomings and all-around worthlessness."

Eyes bleeding onto a dollar bill that mutes a mouth: Pretty high-concept for a retarded band that writes joke songs about scenesters. Also, shouldn't this noble protester go by something like "Profit$" instead of "J-Dog"? 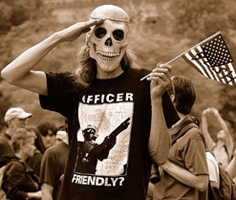 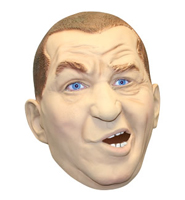 I'm not sure why any performer would want pink splatter around his lips. The most flattering interpretation is that "Deuce" chugs Pepto Bismol with a sloppy desperation that suggests especially violent diarrhea. The rest involve speculation on the kind of fuzzy, Care Bear-like creatures that might produce bright, rosy ejaculate. 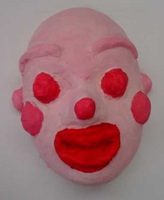 "Charlie Scene" aims for "blanched ghost of Eazy E," achieving this effect with minimal creativity. On the plus side, he stands the best chance in the band of being perceived as a real gangster and shot. His cohorts will only be mistaken for circus performers and asked to juggle. 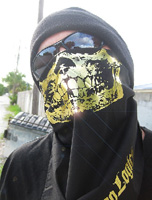 Suggested upgrade: This "bandeezy," as its manufacturer calls it, gives Charlie's uninspired fake-thug ensemble new flash. While it lessens the likelihood that he'll be mistaken for a criminal, it substantially raises the prospect that he'll be shot on principle.

There's nothing especially humorous about this "Funnyman" costume, other than the inherent hilarity of rap-metal faggots in masks.

"Johnny 3 Tears" just got out of jail. I'm sure butterfly masks go over big behind bars. 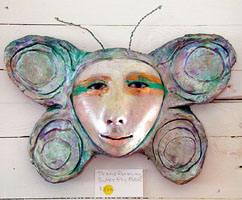 Suggested upgrade: Now more than ever, Johnny should let his butterfly soar free! 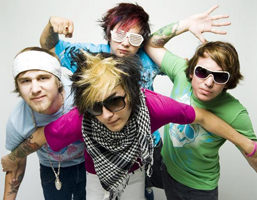 This picture alone established Brokencyde as part of music's lowest echelon. This video guaranteed the group prime placement in the worst-musical-happenings pantheon. Amazingly, there's much more wrong with this fake-crunk clusterfuck than these criminal offenses suggest. There hasn't been a full-length, single-artist slag in months, and because Brokencyde deserves prolonged evisceration more than any act that has ever appeared in this space, next week's all-to-themselves column is their reward for topping this countdown.