"We decided we were more disgusted and bored with the state of heavy popular music than we were with each other. Regardless of where our separate paths have taken us, we recognize there is a powerful and unique energy with this particular group of people we have not found anywhere else. This is why Limp Bizkit is back." - February 12, 2009

Problems with this statement:
1) The suggestion that the word "heavy" could accurately modify "popular music."
2) The notion that any entity, even something as inherently pathetic as "heavy popular music," could benefit from the messianic services of Limp Bizkit.
3) The fact that it contains the phrase "Limp Bizkit is back." 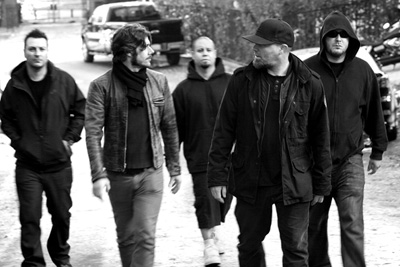 Good job, your hat is facing the right way. Now just fix 5,428 other problems, and you'll be a decent band!
With dumb-white-guy anger levels soaring due to economic hardships and an insufficient supply of "mosh asskicking music" on the nation's butt-rock radio stations, a beacon appeared in the sky above Jacksonville, illuminating a goateed, backward-capped silhouette. Thusly summoned, Limp Bizkit promises to restore the misremembered glory of that demographic's halcyon days, back when "hip-hop" meant white dudes rapping over funk-metal riffs, back when women got violently groped in the pit and liked it!

At its commercial prime (1999-2001), Limp Bizkit formed a visceral connection with pre-pubescent delinquents, swaggering wiggers and the sort of testosterone-oozing tough guys that drunkenly slam dance into kegs at frat parties. The group targeted listeners so moronically aggressive that they seized "Break Stuff" as a rallying cry, and so sexually illiterate that they accepted grade-school euphemisms like "Nookie." The album title Chocolate Starfish and the Hot Dog Flavored Water combines long-winded prog-rock syntax with a gross, childish scatological reference, like something Billy Corgan might have come up with at age 5, if he were being molested at the time. More than Kiss, Ted Nugent and the '80s hair bands, Limp Bizkit made rock pathetically, nauseatingly stupid. 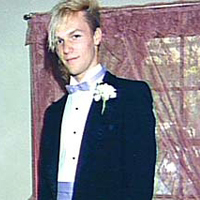 Fred Durst in high school: Less absurd than today's emo kids.Astonishingly, things have somehow gotten worse in the past few years, and Limp Bizkit really does represent the lesser of two evils when contrasted with "heavy popular" acts. Would I like to see balding troll Fred Durst rip every golden coil from Nickelback singer Chad Kroeger's stupid fucking head? Goddammit, yeah, I guess I would. Rolling Stone cites "screamo-crunk" fags Hollywood Undead and Brokencyde as Limp Bizkit's direct descendants, but when it comes to aborting obnoxious offspring, better late than never. Unfortunately, I can't put too much faith in Limp Bizkit's "Saving you from even shittier music" rhetoric, because the group verbally slap-fought with the likes of Creed, Slipknot and Taproot without any of the confrontations resulting in an ideal dual-fatality outcome.

If Limp Bizkit isn't really going to murder any of these assholes, I'll return to my initial reaction: Who the fuck wants this reunion? A silent but vocal minority applauded this development on message boards over the past week, using flawed logic I'll now debunk.

Back when Limp Bizkit was relevant, its self-congratulatory fans cited them as a hard-edged alternative to "pussy shit" like Britney Spears, Christina Aguilera and 'N Sync. Those artists remain active, and not only have they retained their popularity ('N Sync in the form of Justin Timberlake solo), but also they've achieved varying degrees of critical respectability. Therefore, modern defenders compare Limp Bizkit not to its successful erstwhile peers, but instead to current kiddie fodder, as if the pushing-40 Durst were still competing for the allowance dollar. Much of the opposition actually comes not from pop-crazed adolescents but instead from metalheads who resent Limp Bizkit's fraudulent placement in the "heavy" category. Limp supporters, being bullies by nature, don't want to pick a fight with fans of brawnier bands, so they conjure a straw-man pansy who "hates on" Limp because they're too loud and scary, unlike his beloved Jonas Brothers.

Limp Bizkit has sold more than 50 million albums worldwide. However, this doesn't mean 50 million Limp Bizkit fans ever existed. For example, Chocolate Starfish sold roughly 6 million U.S. copies. If isolated in a single city, Chocolate Starfish purchasers would comprise the fifth largest metropolitan area in America, though Philadelphia would move back into that slot once the president bombed Bizkitville for the good of the country. Anyway, these six million people constitute the group's core fan base, and any buyers of subsequent records (like the million woodwork-dwelling freaks who tracked down 2005's EP The Unquestionable Truth, Part One) are just a subset of that group.

That six million figure has decreased exponentially since Starfish. Some pre-teen fans abandoned Limp Bizkit once they developed rudimentary social skills. A sizable number died in accidents related to tractor wrestling, shallow-water cannonballs and zoo-animal moonings. The remaining Limp Bizkit fans deserve congratulations, I suppose, for surviving the past decade despite overwhelming intellectual disadvantages. We could all learn something about adaptation and persistence from these unreconstructed primates.

The world needs to know: Is AssAssAssain29 still a fan?