Finally, I receive an email from ace Australian promoter Tim Pittman, the man behind the Tales From The Australian Underground compilations (and also a fine Sunnyboys reissue - think Radio Birdman, and you won't be far wrong). 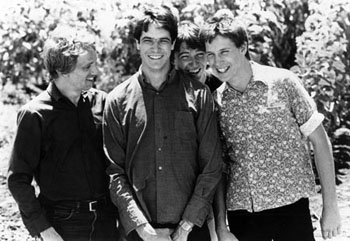 Yep, these are some Sunnyboys, all right.

For mine, the term 'garage rock' is widely abused these days, mostly stemming from The Strokes/White Stripes surge in the early Noughties. Quite how they got the moniker escapes me. Lazy journalism I think.

My own definition of garage - or '60s punk as we used to call it - is the type of bands found on Nuggets, Pebbles, Boulders and in Australia on Ugly Things. However, I can agree that there was a strain of garage-rock (or '60s punk)-influenced bands unique to Australia during the late '70s and until the late '80s. For the most part, these bands (Lipstick Killers, Lime Spiders, The Stems, Wet Taxis) were initially introduced to these sounds by Radio Birdman, who had covered many of the tracks by the original punks in their set (13th Floor Elevators, Remains, Outsiders) as far back as 1976. The Saints were on another tangent, covering '50s standards from Elvis to Connie Francis to Del Shannon, though they do a smokin' cover of the Missing Links' 'Wild About You' on their debut.

The Lime Spiders were kings of this. Their earliest repertoire was almost exclusively covers of '60s punk, but it was so obscure hardly anyone knew it! It was all toughened up but it was still great. Then they started to write their own songs. Oh well...

There were plenty of other bands who were less faithful to the original sound but still covered these bands in their earlier set. The Scientists, for instance, used to perform tracks from The Standells and The Seeds, but they also covered Suicide, Big Star and Leonard Cohen, so they were never straight copyists. The Hards-Ons, too, would cover The Elois and The Choir (among others) next to covers of Kiss and Ramones. The Eastern Dark would cover the D-Coys and The Stoics next to covers of The Soft Boys and the Descendents. And the Sunnyboys seemed to (unwittingly) latch onto the garage-Beatles stylings of the Remains and use it as a template for (again unwittingly) a successful chart career. 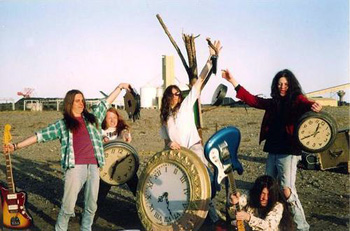 Some of the best current Oz bands boast a Tumbleweed connection.

It seemed to me that a new generation rebelled against that sound in the late '80s and moved onto more contemporary indie-sounds. Tumbleweed carried the flag for a while, covering "Mr. Pharmacist" and other gems for a younger audience, but they were isolated and shunned by the older garage brigade.

In more recent times, the bands that have best exemplified this style are The Pink Fits (ex-Tumbleweed), who are super raw - like The Mummies - and play all original material, and The Unheard, who are also ex-Tumbleweed and who play super-heavy distorted versions of Ugly Things classics. Geelong's Frowning Clouds - like The Stems previously - are very faithful to the '60s punk sound. Eddy Current, it could be argued, are also very garage, but I've not known them to cover any of those bands, and they always seemed to me more like a cross between The Kinks and the Modern Lovers than that stoopid Saints and X comparison people make.

Purple Hearts - originals
Missing Links - originals
Black Diamonds - originals
Radio Birdman - for introducing it all.
Lipstick Killers - post-Birdman, the first real '60s punk jukebox. One killer single.
Sunnyboys - for introducing it to the mainstream
Lime Spiders - for opening up the Pandora box of '60s punk.
The Stems - for being so faithful to the sound.
Hard-Ons - for putting the snot back in.
The Pink Fits - for bringing it all back again (with added fuzz).