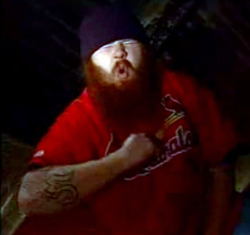 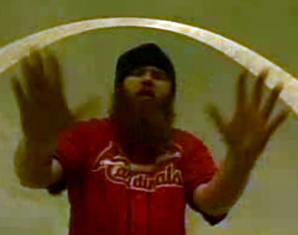 Sadly I have known about this band for years. As far as bottom-shelf, bargain-basement moshcore goes, they're passable, but more than anything this video feels like a time machine to 1998. Back then, you would go to a hardcore show in some Midwestern hellhole like St. Louis to see some terrible band like Zao, Converge, or Integrity. The headliners were bad enough, but the openers were the fucking worst. Invariably there would be an extra-shitty, randomly nu-metallish local tough-guy band that would muscle its way onto the bill and play an agonizingly long set.

Vampire Mooose has all the signs of being that band: shrill "cheap Ibanez into Crate solid state head" guitar tone; a fat singer in baggy jeans and an oversized sports jersey who looks like the poor man's Chris Barnes; and backing dudes who were slightly above average in high school auto shop and spent most of their nights smoking weed on a rock in the woods while debating "which jams harder, Cowboys From Hell or Vulgar Display of Power?" -- Sgt. D 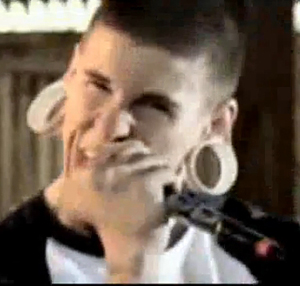 It seems plausible that the band intended the spelling "Suffokate" to distinguish them from "Suffocation," so fans of that group wouldn't become murderously disappointed and kill them a couple songs into their gigs. However, it's equally likely that they spelled it with a "K" just to Korn it up, because aesthetically they're stuck in that era. Or, maybe they did it as a loving gesture toward someone named Kate, someone one of the members was dating until she came to one of their early shows and thereafter stopped returning his calls. "Let's change our name to SuffoKATE, she'll want me back for sure!" *Kate moves to avoid being associated with the band, changes her name to "Abigail."*

It's hard for me to gauge how much I despise Suffokate, but suffice it to say I need another deathcore act like I need a giant, gaping hole in the ear. I can't imagine an otologist condoning what this grunting boar did to his fucking lobes; on the scale that measures aural trauma, that must rank right below "listening to tired breakdowns, speed-typing drumbeats and vomitous belches from a shitty band that was probably named for some dude's totally pathetic unrequited crush." It's not just Suffokate, though: Look beyond the loud growls, downtuned riffs, and self-inflicted deformities, and most of these deathcore dudes are as fragile and breakable as baby necks. Also, they usually harbor lots of anger toward the women who rightly rejected them. Look for a name change to Fuckukate by 2012. -GD