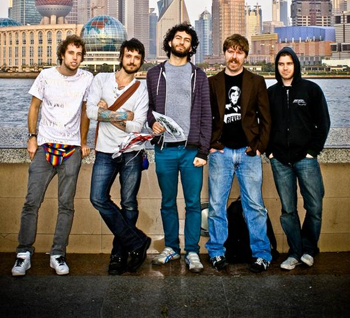 Face to face with faces of Horse.

SA: On your Reigns in Africa tour, you'll encounter wildlife the likes of which you've never seen, even during your extensive travels! Thus far, though, what has been your worst encounter with an insect?

HTB: In Russia we went to a little market and when we came out our bass player Brian said "Ow" and there were two bees in his shoe. No one saw them go in there. They both stung him and then his face looked like a watermelon and his ankle was like a large salami log, just round with no signs of any bones showing for two weeks. In the van he would just cry for a while every day those two weeks. Also near Chernihiv, Ukraine (by Chernobyl) we found a mutant wasp. It looked like a regular American wasp but it was like 3 inches long. It looked like a wasp on one of those games, Mega Man or Adventure Island. I can't remember. Our driver put it in a bottle and took it home to Belarus.

SA: What would you consider the perfect crime?

SA: Horse the band has booked its own worldwide tour, instigated the Cutsman dance craze and appeared TWICE on a "Best Keyboard Breakdowns Ever Made!" Top Ten list, along with other achievements that remain shrouded in mystery, only to be appreciated by more advanced future civilizations. Of what Horse the band accomplishment are you the proudest?

HTB: Probably rendezvousing with beautiful, intelligent women of the highest order and playing shows in exotic locations around the world while either making money or having all of our expenses paid, and still maintaining complete privacy at home.

Equally gratifying is inspiring the amount of hatred we get from random Internet bros whose only defense mechanism is to type a comment on their computer and realize if they ever go to a place we went to it will be in a tourist capacity when they're old and have worked their whole life. They will probably end up defining an entire decade of their life around that one week-long experience, only see tourist attractions where VISA and Mastercard are accepted, and at most hope for hooking up with another depressed 50-something alcoholic middle-American ruddy-faced smoker-voiced cryptkeeper and enjoy shrimp cocktails together and then get wasted at a half-full tourist club wearing a party shirt and cargo shorts near their hotel and upload photographs of signs and buildings onto their Facebook when they get home.

SA: Who has the biggest weiner in the group?

HTB: Ed Edge, our triangle player. I have seen his half-erect and it poked out and then sort of drooped all the way down to his kneecap. It's a weird feeling to see something like that for the first time. Kind of like that Domino's commercial. Your whole foundation of reality is just gone from one moment to the next.

Thanks to the Bunt, Traitorous Leopard, Cock Soup, Eight Is Legend, xTOMMYBOYx, -Atom-, Sgt. D and YeahYouKnowIt for contributing questions. Watch No Music Discussion threads for the next Q & SA opportunity!