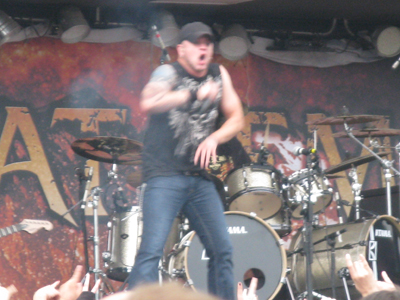 The presence of Marilyn Manson on the Mayhem bill meant goth gastropods roped into corsets that looked like circus-elephant restraints, and whales trapped in enough overstretched fishnet to sweep all life from the ocean floor. Watching All That Remains was slightly preferable to gazing at those acres of gross uncovered flesh, but singer Philip Labonte made the listening part nearly impossible. His delivery during the choruses represented the triumph of raspy smoothness over bland gruffness, like Huey Lewis raping Daughtry.

Labonte's backing band tried valiantly to salvage the songs. Some guitar-twiddling long-hair kept soloing, a female bassist would occasionally shriek, and the drummer maintained a decent pace. Still, when you've got somebody singing "believe in me, like I believe in you/my heart would be forever in your hands" like he's earnestly auditioning for American Idol, there's really nothing you can do instrumentally to keep up metal appearances. 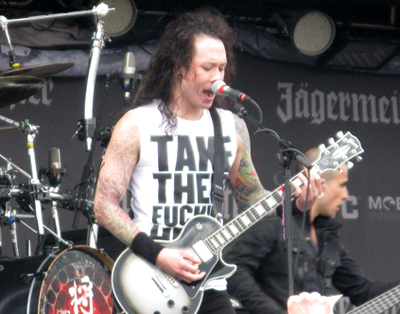 Musically, Trivium might be even worse than All That Remains. It's a pointless tossup between disgusting options, like comparing flavors of ass smoothie. (I do not recommend you search for this.) But Trivium gets a slight nod because it exudes an endearing pathos reminiscent of Anvil, the recent documentary stars. Like those guys, Trivium's members wear their own band's shirts. They genuinely seem to enjoy playing rudimentary metal with stupid lyrics. And they take obvious pride in even the lamest accomplishments, like 'headlining' by far the shoddiest of three stages at a terrible event.

Singer/guitarist Matt Heafy resembles the singer of the Scorpions, and I don't mean "the singer of the Scorpions, when he was younger." He's the most prematurely haggard-looking 23-year-old in the music business, assuming Lindsay Lohan doesn't count. During the tuneful vocal parts, Heafy balanced prog-nerd wimpiness with old-Incubus fruitiness. During the growly parts, he sounded like every other fucking growler. He'd even split his banter between the two voices, such as (fruity)"Get your fucking horns"/(growly)"in the air!" Few bands show as much devotion to blending equal parts retro thrash and clean-toned radio-rock as Trivium. Unfortunately, this isn't an admirable trait.

"Scream for me, you American pussies!" 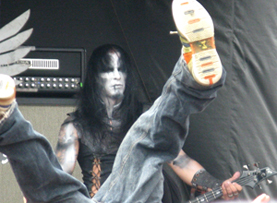 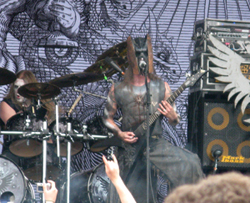 Behemoth delivered the best moments Mayhem had to offer, most of which involved a guy named Nergal chiding fat Midwesterners for displaying insufficient physical exertion. It's like having your own stern Eastern European trainer, albeit one who wears cosmetics and occasionally dons some sort of robot-goat mask. Masochistic American metal fans welcome this punishment because they realize they deserve derision from foreign musicians who paint their faces for weird, serious church-burning reasons and not just because they want to bro down with their Juggalos.

Many Mayhem ticket-buyers probably missed Behemoth because they played at 3 p.m. But for future reference, assuming you attend any upcoming touring metal festivals for some godforsaken/totally-understandable-work-related reason, here's a guide to the kind of groups you should watch. Pay attention if the band in question: