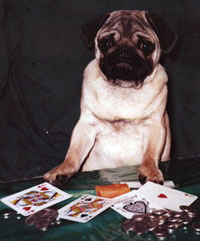 This dog is part of a vast conspiracy.Track 3: "Undisclosed Desires":

"Undisclosed Desires" exemplifies what Depeche Mode has sounded like ever since you stopped listening to them. It prominently features plucked violin strings and slap bass, instantly relegating this track to the shit pile. Slap bass has always been music's unfunniest fart joke, and now it's experiencing a resurgence thanks to I Love You Man, which not only helped popularize "man cave" but also turned "slappa da bass" into something stupid people say. If someone remakes I Love You Man a decade or two down the line, Muse will replace Rush as the featured band over which buffoonish man-children bond. Muse might be today's next big thing, but they're tomorrow's punchline.

Muse has often been accused of riding Freddie Mercury's mustache, but this time they actually go all thunderbolts and lightning with the multi-tracked "Bohemian Rhapsody" vocals. To be fair, only about 20 seconds sound exactly like Queen, but they overpower the rest of the song, like a couple drops of fruity perfume dropped into drinking water.

Overproduced and treacly, "Guiding Light" auditions for retroactive inclusion on the next Monster Ballads compilation. I imagine this is what the slow songs sound like on the post-Perry Journey albums, except those probably have better singing, organic-sounding drums and more of a relevant, contemporary feel. Muse forced Celine Dion not to title her Vegas show "Muse," arguing "we don't want people to think we're Celine Dion's backing band," but songs like this do more to reinforce that impression than any name confusion ever could.

Bellamy starts bungee-dropping his voice like he's suddenly in System of a Down, but of course those guys take conspiracy theories seriously, whereas he's just kidding around when he starts demanding "I want the truth." "Unnatural Selection" ends with a riff that's less "trademark Muse" and more "shamelessly recycled." Seriously, if you'd played it for a Muse fan a few months ago and asked them to identify it, they wouldn't say "what are you trying to pull, buddy? I know Muse, and this is something I've never heard." They'd name an already existing song, probably "New Born," though Muse's tracks are so interchangeable that there would probably be a wide variety of answers.

"I Belong to You" starts out with some adult-contemporary Maroon 5 crap that people you want to punch would call a "groove." Bellamy lets you know he's one of these people with a "whoo" and some "soulful" humming, but then midway through he starts serenading you in quivering, poorly pronounced French. It's like the song takes the listener on an awkward date and starts getting way too serious. Also, there's a part where Bellamy sings "you are my muuuuu," rhyming it with "confused," so everyone knows he was name-checking his own band, except he never complete the enunciation. Live, fans will surely finish the line for him, and they will feel gleeful and clever for doing so. I fucking hate this kind of shit. And besides, this really isn't their Muse anymore.