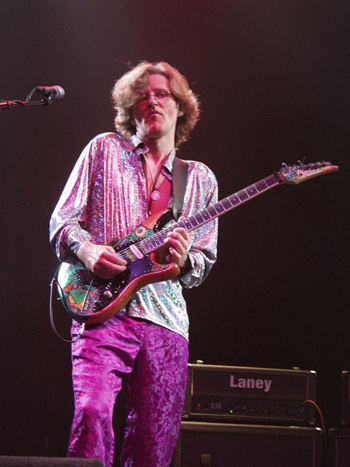 SA: Roine, you're involved with a large number of projects -- The Flower Kings, Transatlantic, Agents of Mercy, and formerly Kaipa and The Tangent, to say nothing of your numerous guest appearances. Other musicians like Steven Wilson are well-known for their diverse array of side-projects, but none of them seem to play live and tour with all of their projects as extensively as you have. How do you find the time to juggle these different projects, and how do you manage to schedule how you work with each band when so many people with their own differing schedules are involved with each project?

RS: I admit to it being a bit incestuous and maybe they will all end up sounding the same. But hey, they do already, don't they?

OK, maybe it's a bit of a problem, but I think I've found a solution: gradually get just about the same people to play on all my projects. I have a motto that saves me a lot of work: "Ein folk, ein gruppe, ein reich, ein fatherland." It means "King of All Prog."

SA: Do you guys ever try to out-nerd each other with your knowledge of obscure prog bands?

RS: No, not really, but Mike and I DO know a LOT of odd bands. Since I'm older, I have the advantage of '70s Scandinavian bands such as Älgarnas Trädgård, Anna Själv Tredje, Svensson's Peace, Fläsket Brinner and Hirvi.

PT: Well, I like to think that as one of the older members of the band, I have the upper hand. I mean, I saw Camel play The Snow Goose live on the original tour. Oh yes. I rest my case.

Neal Morse, vocalist/keyboardist: I did take a prog trivia quiz that Mike had on the Web last June, and I flunked royally. I couldn't even remember who co-produced Genesis' Trick of the Tail album. I'm so ashamed.

SA: Bands occasionally have trouble making sure their songs are long and interesting enough. When you're in a group like this one, does the opposite problem arise? During the writing process is someone appointed as a sort of designated songwriter, assigned to say "guys, I think maybe this song has had enough"?

PT: Huh, I don't think so. We pride ourselves pretty much on length alone.

RS: You should know by now that in prog, more is MORE!!!

NM: If anyone was going to be labeled the Songwriting Sheriff, particularly about length, it would be Mike. He usually wants to make things longer, though.

SA: Have any of you ever had a particularly elaborate stage setup? If so, what's the craziest stage prop you've ever had to work with?

NM: I once played at a frat party that had a "circus" theme, and there was an elephant right in front of me, and his trunk kept going under my keyboards and between my legs. I thought he was gonna suck up my sustain pedal!

Mike Portnoy, drums: I'm not sure, ask my impostor in NYC. He seems to throw my name around more than I do!

Thanks to Petey, Zach, Misogynist and Velocirocktor for contributing questions that were used in this interview. Watch NMD threads for the next Q & SA opportunity, and if you're not already an SA member, join to participate!