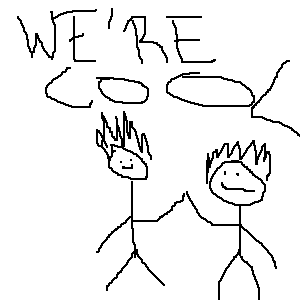 Though the movie was pretty funny, it is a humor that leaves you with a guilty conscious. A more racist movie I could not imagine, as this movie was such blatant left-wing propaganda that I bet in 50 years (in the unlikely case people remember this film) Borat will be seen as backwards and ignorant as the people it skewers.
Why were blacks and Jews allowed to escape the film unscathed? I'm sure a group of black thugs throwing dice would have just as many prejudicial and stupid things to say as a group of drunken white frat boys. But Borat just goes up to the blacks to prove that yeah, its okay to approach some black urban youths at midnight in a bad neighborhood. And really, look at that dichotomy- 2 stereotypes (black thugs/white frat boys) and Cohen reinforces the stereotypes for the whites and then undermines the stereotypes for the blacks.
Taking this in the context that Cohen studied extensively the history of anti-Semitism and wrote a thesis on the role of Jews in the civil rights movement, its abundantly clear that Cohen is doing nothing more than dissemintaing his biased and racist world view. This movie is essentially a malicious counter-attack in a race war that is nearly over.
But what I find especially appalling is that Borat is supposed to be against stereotyping and racism and is trying to dispel those primitive ideas, and all he ends up doing is being the biggest bigot of them all.
Its the same old song and dance- white Christian Americans are the devil, with a stupid mindset stemming from an unenlightened and obtuse European ideology. A true comedic genius would have gotten at the true depths of all prejudices, instead of just skimming the filth from the surface and putting it on display.
Besides all of these criticisms, (which are necessary in response to the films intent), what you have left is a low-brow comedy with no real plot or character development. The humor is dim-witted and scatological, but it gets laughs, so it works. I'd rather watch Borat than Starsky and Hutch but beyond that ugh...

I was walking down a crowded breezeway this morning, on my way to work, when up ahead I sensed a disturbance. No, before you ask, not like a disturbance in the force, more like a change in the air just before it starts to rain. As I drew closer, I can see that traffic slowing down and starting to split like a stream of water around a large stone in the river.
As the crowd this ahead of me, I can see it. I can see the cause of the disturbance, the force that is diverting traffic and disrupting schedules. The source of the cacophony that grows louder with each faltering footstep I take. She is magnificent, if, by magnificent you meant mind-boggling. From my vantage point, where I stand stunned and immobile, I can see her clearly enough that my eyes begin to water.
350lbs of cottage cheese, jelly rolls and chocolate sauce poured into a skin-tight, seam-straining outfit of blindingly neon green, her hair done up in a gravity defying ribbon-candy-esque modern art display of shockingly pink hair extensions; her nails were 6" of rhinestone encrusted harpy's talons, one of which was constantly seeking some small creature that lived in the depths of her fantastic hairdo; shod in a set of 8" spike heels (obviously reinforced by unobtanium to support the tonnage) and made of the very best faux-zebra skin, stood this multi-hued human landslide.
That was when the smell hit me.
While I have never been in a cheap perfume factory that was once a storage facility for the bodies of people who were killed in a natural disaster but had to wait 6 months in an heated warehouse before they could be identified and interred, I imagine that the smell of that factory was but a pale imitation of the eye-watering, sinus-clogging, stomach emptying stench that assailed my poor nose. Obviously this creature had discovered that cheap perfume was an adequate replacement for basic hygiene.
Then there was her voice. How do I describe that bizarre sound? Do I compare it to the sound a cassowary would make if being mounted by a rhinoceros? Do I allude to the unholy shriek of imploding matter that accompanies the birth of a black hole (or would if the sound could escape)? I stood there, ears beginning to bleed, paralyzed, rooted to the spot like a deer in the headlights.
"If dat fuckin bitch tink dat my baby daddy gone gib her a fucking nickel o my mother-fuckin food stamps, the bitch done loss her fucking mind. You no dats right or my name aint Laqueefa Toniqua Sharneefa Fem-ale PaJaMa."
It was at this point that I noticed she was not actually speaking to another person, but speaking into a cell phone. Well, that is not exactly accurate. She was screaming at the phone. The odd part of it was, she was not holding the phone to her ear as most anyone else would. No, she would hold the phone up long enough to listen, I assume, for some encouraging sound that meant her target was paying attention. Then she would pull the phone away from her ear, rotate it around to her pink lipstick encrusted pie hole and scream into the microphone. She would then rotate the phone back to her ear and repeat.
Then, to my abject horror, she noticed me. I committed that cardinal sin and allowed eye contact to be made. Oh lord, she had seen me, seen that I was staring at her in shock and awe, seen that I was fascinated and repelled. What was I to do???
Her piggy little eyes narrowed causing a nauseating ripple effect in the fat on her forehead and she screamed at me, "What da fuck you lookin at bitch, you like what you see, mother fucker?" She had stopped, in the middle of a busy breezeway, to hold this conversation at the top of her voice, dressed like a circus float and smelling like a perfumed abattoir and she was asking me what I was staring at.
I laughed. I couldn't help it. All of the horror, the sick fascination and the nausea came flooding out of my body as laughter. I laughed until my eyes started watering, my side was hurting and I was short of breath. Laqueefa Toniqua Sharneefa Fem-ale PaJaMa start cussing and screaming, hurling threats and epithets with equal abandon. She turned around (a sight to behold, I assure you, akin to a pirouetting Exxon Valdez) and stomped off down the walk, sending onlookers fleeing before her.
I could almost hear, in my fevered brain, the cries of "Godzirra!!!" as I slowly got back to my feet and, holding my side with one hand and wiping my eyes with the other, continued on my way to work.