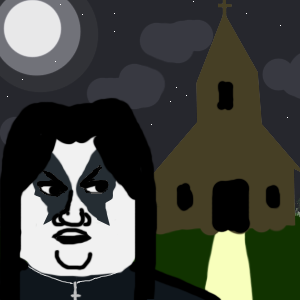 of course Jesus being sinless when he died completely violates the doctrine of original sin and the trinity thing doesnt make sense because he is a completely different consciousness, otherwise there would be absolutely no point whatsoever for all the times Jesus talked to God, and therefore worship of him flies in the face of one of those commandment dealies people make a fuss over.
i wont even go into this holy spirit business. What, is he supposed to be some magical fairy ghost living in God's basement or something?

Every time I see a creationist like Rampus, who writes well, and is clearly not completely stupid, I feel sad. Basically there has to be something inherently flawed in the way some brains model the world if the god hypothesis actually seems logical to people.
I bet you Rampus is logical in all aspects of his life, but when it comes to things that impinge on his religious beliefs there is probably some sort of switch that goes off.
What is that like? Is there a feeling of uncomfortableness when facts contradict deeply held beliefs?
I feel something like that when someone argues with me about why mages are a better dps class than rogues in World of Warcraft. I try to debate it for a while because I have a rogue, and I cling illogically to the belief that rogues are better, but I know deep inside that its better to be a ranged DPS since you require less healing -- there is no way around that. But I can't bring myself to actually admit it out loud -- its physically painful almost.
I bet religion is kind of like that. Just like I am fond of the aesthetics of a melee DPSer with daggers poking at things, religious people are fond of the aesthetics of a creator running things. So no matter how many facts we learn about why our position is ridiculous, we just can't let it go.
Rogues are just cooler than mages with wands. A caring omniscient being is just cooler than unfeeling laws governing a non-anthropocentric universe.
I challenge an intelligent design believer to read the first couple of chapters of the Blind Watchmaker and keep their beliefs. I don't think its possible. If you have a bare minimum IQ you'll go "oh yeah, I get it". After that its just book-keeping to see what confirmations we've already collected from the real world (and there are literally thousands and thousands of practical confirmations by now for evolution, even outside of theoretical common sense).
Where is the Blind Watchmaker type text for people who play Rogues, so that we may also abandon our silly beliefs?
How come intelligent design theorists don't propose some testable predictions (or any predictions at all about the natural world)? How come Rogue-proponents don't ever post their guild DPS-meters versus healing-recieved meters for encounters like Gruul or Prince Malchazzar? I don't think these sorts of self-inquiry would stand up to much scrutiny.

Lack of education, child abuse by way of thorough brainwashing into religious belief, and fear of the unknown/one's own hidden desires are all powerful motivators. Most of these people believe that 2,000 years ago some guy was born from the loins of a virgin who was impregnated by God, murdered by bleeding to death while strung from a cross, tortured in Hell for humanity's sins, resurrected, and then ascended into heaven among other childish and primitive things. How do you expect them to not hold views that are rationally inconsistent?