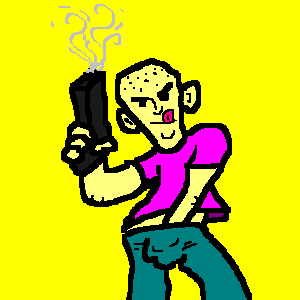 The scope is what attracted me to it in the first place. I saw the gun in a little rack in the corner of the store and went for it.
As far as penetration of .22 short is concerned, its actually pretty good all things considered. Well it went through my backpack, into a keyboard inside of the backpack, knocked off the the enter key, went through the other side of my backpack, and lodged itself in a thick newspaper. So it did more than expected. I love the noise too. To the naked ear, it sounds like x39 does when you wear hearing protection.
I think I might take random shit into my basement and plink. I do need to sight in the scope.
The rifle cost me $125 before tax. Also, .22 short has a lot more penetration than I thought it did. Although it scared the dogs away, it isn't very loud so it works great for shooting things around the house.
I was laying on my bed and saw a spider along the wall. This could not do, so I shot at it with another .22 short. I didn't see where the spider went, but I think it went higher than it should. Fucking scope must be off. It was also blurry at two feet. Then in the basement I was shooting more spiders and hit my rusting water heater. It embedded in the side though, so a close call there.

Well, they got the CCW ( concealed weapons permit ) here in O-hi-ya, I was watching this movie, Taxi driver I think it was called with Robert De Nero and he got this cool thing that straps to his arm, he made from a drawer wheel and track thing. I was wondering if they actually have something like that? Anyone ever seen one of these? I looked on Google but can't find anything.
would be pretty cool., wonder if it would be legal if you got a CCW? Anyone know?