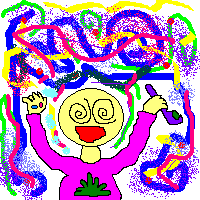 I outgrew my Asperger's at around 16ish. Before then my main hobby included reciting airline timetables and reading maps. I also wore all white exclusively and had no friends.
What helped? Puberty hit, and I made a conscious effort to be sociable and socially acceptable, so I can, you know, get laid. I started forcing myself to talk to people, make small talk, kill off the superiority complex and all the antisocial tendencies and learning how to say "fuck it" to things, as well as laughing things off and not take things seriously. Then I found that alcohol really helped, a lot.
Then, I did Ecstasy. Holy shit.

Now, a bit of the science behind how these drugs work and why clonazepam may be helping you:
Your brain is a bunch of pieces of meat called cells that rub up all against one another. Sometimes they send a signal to the next cell in the mantrain. They do that by spurting neurotransmitters all over the second cell, past the synaptic gap between them. The neuroreceptors on the second cell get totally covered in neurotransmitters making the cell get so exicted that it then shoots its load too! Our brain is special not because it is made out of these cells but because of the fact that they link together in these aforementioned mantrains in an amazingly complex circlejerk. There are lots of neurotransmitters that they can use to signal each other with, too, and some will tell a cell that it's okay to fire while others will tell it to hold off because mmm it feels so good keep going.
Now, Cloneazepam (which is a benzodiazepine), like you mentioned, works on GABA receptors (it triggers them, so it's an agonist). It fills up the cell's holes real good and it thinks that the neurotransmitter GABA is in it, kind of like when you pull a Houdini on someone. So, even though it's not GABA, it stimulates a similar response to being filled up with it like it kind of like how a vibrator will stimulate the prostate just as well as a big twelve inch cock. The response that it stimulates is a reduction in anxiety, induced relaxation - it signals to your body that it's utterly spent and you need to just lie back in the afterglow!
Now we can get to antidepressants. SSRIs, or Selective Serotonin Reuptake Inhibitors, do exactly what their name says - they selectively inhibit, or prevent, the reuptake of serotonin in the synaptic gap. See, normally after a neurotransmitter is fired it just gets absorbed back into the cell. SSRIs prevent this from happening. If you can think of it like this, clonazepam makes the cells think that their night of passion is over which then causes them to send the message to relax and towel the neurotransmitter loads off of their face. SSRIs, on the other hand, are kind of like bukkake. The neurotransmitters never get cleaned out of the gap, so soon the receiving cell is just absolutely coated in them. Since depression can be caused by a lack of serotonin, SSRIs are used to treat it. Their method of activating is different, but in the end it works out similarly - either way, everyone involved gets off. Instead of filling up those nice tight receptors like with agonists, SSRIs cause cells to trigger when the serotonin hits them but prevent them from then stopping to take it all in. It lingers in the gap between the two instead, kind of like the brief instant when it hangs between your mouths when you snowball someone, which increases the total concentration of serotonin. This makes the cell get off that much more easily since it can only do that if it gets lots of neurotransmitter all over it.
Serotonin is a bit more influential than GABA and acts on many more systems within the body. That's why SSRIs are a lot more unpredictable in their effects, since after all, not everyone likes getting neurotransmitters all over their face even if everyone does like getting laid - there are limits, you know? Everyone is affected by GABA agonists fairly similarly, even if it takes different doses because naturally some cells are tighter or looser than others, but not everyone will react the same way to SSRIs in general or different specific SSRIs.
I would say that if clonazepam is helping you deal with your problems it would seem a lot more likely that they're stress related rather than a true case of depression needing SSRI medication. Of course, relying on benzos to solve your stress problems is not a good thing because it can lead to addiction - and you wouldn't want your cells getting totally filled up every day like that, because when you stop pounding them incessantly they get really loose and ache to be filled, and GABA just won't cut it anymore until they get used to having to rely on the motion of the ocean rather than the size of the boat! Luckily, they do eventually go back, but they'll certainly make your GABA neurotransmitter system as a whole feel really inadequate until they do. Since I doubt you want to go through with that, what with the seizures and all, I advise trying to figure out what exactly is causing the problems in your life and working with that rather than relying on pleasures of the flesh to distract your mind from the way it really feels. Of course, some nice steamy action is totally healthy in any mind-body relationship - but it's a question of knowing when it's appropriate to force your cells around like that. They may not say no, but that doesn't mean they aren't thinking it.