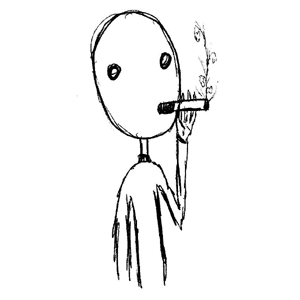 The worst person I have smoked with was a gay gentleman. A bunch of friends all hanging out at school, and we decide to light up a bowl. For starters this guy always forgets to pass the bowl and just sits there in all of his douchey grandeur. Constantly you must remind him to pass the bowl which is going up in flames. Then once high he babbles on and on in the most obnoxious faggy voice about this and that. His feminine voice only makes me thinks of him swallowing an endless precession of cocks. Nice kid overall, but awful to smoke with.

As for the drug thing, not to beat a fossilized horse, but I love the analogy in the Matrix between the "red pill" and the "blue pill". The red pill obviously being things like shrooms, acid, e, and pot, while the blue pill is the equivalent to all the legalized poision the pharmaceutical companies try and pump into you so you show up to work on time and don't slit your wrists over your meaningless existence.
I'm not sure if coke is a red pill or blue pill drug. I think it's sorta like the Force, it can be used for good or evil.

Ok- Just need a few replies from the experts so my paranoid level gets back to a normal level on this issue. Here goes: This is what I'm planning to do with my 'sleeping pills and back pain pills' on a domestic flight from the East Coast to Las Vegas:
I'm going to take a can of Smokeless tobacco, put my small bag (12-15 small pills) of 'medicine' in the bottom of an open can of Skoal, replace the tobacco on top of the bag in the tin/can of Skoal and close the lid of Skoal, and put it in my Check-in suitcase in a side pocket on a pair of cargo shorts. BTW- I'll have another Unopened can of Skoal in the same bag/pair of pants so if security checks the suitcase they will (hopefully) be convinced that YES!, I am an actual a tobacco user and I respected their rules of "No Tobacco in the seating/cabin area". (I've actually been told to throw my 'dip' and my bottle spitter away while in air- Who the fuck actually cares as long as I don't spill the shit?????) Guess that's another topic for another post. :p
I'm thinking the chances of these 'items' being found by security will be .005% if not lower.....
I know it's risky to travel with class II and class IX prescription meds when I don't have a script for either, but I'm going to Vegas BABY!!!!!
Any thoughts or suggestions? I'm not opposed to sticking it up my arse if need be, but I don't think it's gonna be necessary. BTW: I made a post yesterday but killed it since this one is still 'alive'. Someone mentioned just throwing them in a sock in my check-in but I'm thinking better safer than sorrier...........

My freshman year of college has begun, and everything is going okay so far. My roommate is alright, although I get some hostile vibes from him every know and then (I moved an empty can he had on his desk to get to the TV remote and he made a big deal about it), but I can deal with that kind of stuff. Anyways, two days ago he told me his friend was coming in from his home town to drink in our dorm room. I kind of blew it off at first, because I don't really care, but the more I thought about it, the more worried I got. See, my university has a ZERO TOLERANCE! policy on this kind of thing, and if he were to get caught drinkin' in my room, I, too would get in trouble. I told him I'd be disappearing the nights he was drinking.
Now, I feel like a giant asshole, and this was a giant asshole move. Even though I'm not here, I can still be held accountable. I had no choice but to notify the RAs. You see, I'm not about to lose my housing over the actions of someone else who will probably get caught, so I had no choice. I could care less if they did this somewhere else, but they aren't, thus putting me at risk. Playing dumb doesn't work in this case, as I would get in trouble whether I was drinking or not. And it's not like I can't pretend I'm not seeing it, since they're going to do jagerbombs.
So, guys, I honestly feel like an ass here. I would have gotten in trouble if I wasn't there and notified them anyways, so I pretty much had no choice. I hate being in this position and being an ass. I feel like shit, and I need consolation. Thanks for letting me rant.