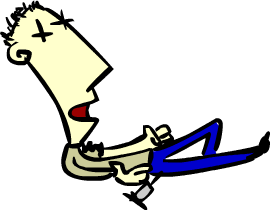 One time when I was in high school my friends asked me if I wanted to huff some hairspray with them. Sure, I said, it sounds like fun. Then I took a really long hit off it and it just burned and burned and when I let it out everyone started laughing because they were playing a joke. They didn't give me hairspray to huff--it was a can of Raid! After that, everything is a blur but I remember waking up with a 70 year old man's dick in my mouth.
That used to be the worst night of my life, but it has been usurped by my vist to the echoplex! Fuck the Echo, fuck LA, and fuck MIA.

I'm addicted to coke. Flat out.
Sometimes more than other times. This morning, since I've been up at 10 (EST), I've had 6 cokes. I can and have taken down entire 32 packs in one day. Caffeine doesn't do much to me any more, I get more antsy not having it as opposed to drinking 6 cokes.
It's horrible for my teeth. My stomach always hurts. And my shits are constantly weird.
I think it's more of a caffeine addiction than anything, but I can't stop. I've tried so many times. I'm going to try the whole "drink shitloads of water to get it out faster and make it go by quicker and less headachey" thing but I'm not sure if that really works.
I wouldn't mind not ever drinking pop again if it meant nicer teeth, a normal stomach/shits, and 10 less pounds on me. (I'm 6ft3 210lbs so it's not that big of a deal but it would be nice)
So any tips to quit drinking so much coke? I smoke too but I'm not looking to quit that. I'm 16 going into senior year of highschool if that changes anything. I don't eat fast food. I haven't for about a year.
I tried drinking lots of gatoraide but that got really expensive when I drank like 5-6 massive orange gatoraides a day. That worked for a while but not the way I wanted because the sugar is still not good.

WOW 8600 plants were seized in a drug bust throughout these 3 states! WOW that makes me cry and the news stated that there were to be twice as potent as an average plant but even if it was shwag they were comparing it too wow! I am seriously sobbing in my hand as i type this!

When I was 16, There was this girl who I liked in high school (15 years old). She was pretty short and skrawny and one of those "daddy's daughter / goodie two shoes / no sex before marriage" christian chicks. Honestly, I only liked her because I thought she was attractive and she also laughed at everything I said, and I wanted to fuck her brains out. Even though she didn't want to have sex before marriage, I was going to give it a shot. I was really turned on by the idea of boning a Christian chick. She had never had a boyfriend before or anything, and thought I was this good clean kid, but never really knew about my darker side.

I asked her out and she was so excited that she started crying. She told me that she really wanted to, but wanted to wait a month first because she was too nervous. I was a bit bummed but said ok. It wasn't that she didn't like me, it was that the thought of having a relationship was way too overwhelming for her. She really liked me a lot, which was funny, because she didn't know that I was everything a Christian hates.
Anyway, the next day I ate 30 magic mushrooms and fucked a 26 year old chick on her period with no condom.
I actually used to do lots of drugs and engage in crazy sexual activities with all sorts of people.
I eventually ended up going out with the 15 year old girl. It was extremely difficult and tedious, but I ended up fucking her eventually (+anal !condom). She turned out to be a shit root and I never wanted to do it again afterwords, even after the anal, so I got pissed off and told her that while she was waiting to go out with me I was fucking a junkie who was 10 years older than me while on drugs. She broke into tears and had to have years of psychiatric treatment afterwords, and I think she will have fucked up relationships for the rest of her life. Today she is convinced that she has aids and I hear that she gets a blood test once a month to find out.
I don't even feel bad about it. Fuck Christians you faggots.