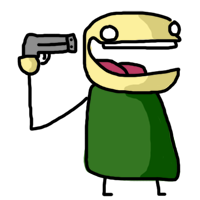 I believe this. In fact, I sent in a tip to the FBI myself- see, about 18 months ago, there were a series of odd requests made to the R/C newsgroups about help with autonomus planes coming from people who'd never posted before, had bad english and came from middle eastern countries. One that sticks out in my mind was a request from a purported Saudi meteorology professor who wanted someone to build him a "research" plane with GPS guidance capable of flying around for 2 hours with a 25lb paylod for something like $15,000. This was soon after sept 11 and at first people would try to be helpful (planes like this, while not common, aren't unheard of in endurance competitions and have even crossed the atlantic) but soon everyone sort of caught on that it was very fishy and wouldn't tell people shit.
A GPS-guided plane with a 25lb payload and 2 hour (~100mile) range. yeah.

can someone say pwnd?
ive shot a desert eagle once, the things are heavy and cumbersum unless your a giant, and then there is no chance you will hit anything after the first shot.
also deagle in cs sux, fear my p228 h4x!!!
(USER WAS BANNED FOR THIS POST)

You might also want to consider using squirrel. It is most likely easier to find in the US, and you don't have to worry about legalities. The only issue that I can think of is that it is gamy. I mean really gamy. Of course, door mouse would most likely taste gamy to. Each to it's own

This is a really good idea. I had planned on killing and cooking some squirrels anyway, so this just gives me even more reason. Plus its cheap!
Maybe I can do that this weekend, then dress the kills, put them on ice, and keep them until I order the garum and whatnot.
EDIT: As far as being gamey, I don't really mind. Roman food is generally full of savory spice and heavy flavors, mainly to overcompensate for things that might not be tip-top
I'm not expecting this to be an amazingly delicious dish, just something incredibly interesting.

I'll be shooting them with a .22, and I've got gloves, a meat thermometer, and a disdain for rare carnivorous delights