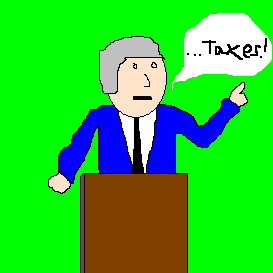 Since the end of World War 2, humanity has lived in a world tinged with paranoia about the end of the world, the apocalypse. We're afraid that one day, Russia will get pissed at America, and launch a nuke, followed by Korea and China and soforth until nothing on the planet remains alive. These bombs were created by humans, the smartest creatures on the planet. Throughout history, the greatest leaps and bounds have been made by humanity, being intelligent and adaptable like we are. The human race has been busy creating all the wonderful ideas, things, places and whatnot that we value so much today.
Behind almost everything we take for granted, there was some pioneering genius or geniuses. Although we can look at frozen food and television, and decide that this is all fine and dandy, look at the darker side. Guns, bombs, torture, poisons, WMDs, the internet and Goatse. Does all this intelligence benefit man when you weigh microwaves and the hydrogen bomb? Perhaps we enjoy all the luxury nowadays, but what happens when the next nuke is launched at another country? Will the chain reaction that could occur be equaled by all the benefits that intelligence and ingenuity has bestowed upon us?
So my question is this; do you think humanity would, in the end, be better off intelligent like we are now, or as mongoloids, incapable of conceiving complex things? Are we better off, in the end, sitting in chairs and surfing the web, or wandering around in huts and hitting things with sticks?

There has never been a Communist country. The teachings and writings of Karl Marx do not depict and condone the events in the USSR and China. Stupid people think that dictatorships and totalitarian governments are communist states. This is false.
I hope your post was a joke. I really hate having to explain this to everyone. Karl Marx was a very brilliant man who wanted all to prosper equally. Driven in disgust by the horrible sights of the Industrial Revolution, he wrote the Communist Manifesto and many other radical writings against capitalism. His writings inspired some of our founding fathers to rebel against the English. Learn what you are talking about.

While we're on the subject, Thomas Jefferson & Co. were traitors and I'd like to see every single son/daughter of the American revolution hanged. Shit, while we're at it, let's hang everyone in history who has ever taken up arms in the defense of their home.
The South has a proud heritage. It's imperfect but it's ours.
If you seriously think the war of yankee aggression was primarily about slavery, you need to pull your head out of your ass. It was about power, pure and simple - who ruled and who was ruled.Eliminating the right to secede - holding people in a union against their will - was the end; Slavery was a footnote. Eliminating slavery wasn't even a goal until the emancipation proclamation, and that proclamation was primarily a strategic maneuver aimed at disrupting the Southern home territory and preventing European powers from recognizing and openly supporting the South.
Slavery was on its way out; it was no longer economically viable. Federal jackbooted thugs, however, persist to this day.

Maybe we're attempting to solve the wrong problem. Outside of those who do it professionally, or are specially licensed, I'm kind of disappointed that humans are still in direct control of their vehicles, especially on main arteries of high-speed travel. Turning a wheel and manipulating levers... seems so arcane compared to so many other streamlined parts of our lives. Our brains are poorly suited to the task of controlling a car, and our track record speaks for itself.
You should be able to get in, tell the car where to go, and have it take you there, moving you along the highway at a brisk 200mph with a mile of space between you and the next guy. Text all you want. Heck, take a nap, shave, adjust your stockings, yell at your kids-- do all the things that used to be dangerous a couple of decades ago.
I know everyone gets paranoid about the thought of computers controlling their cars, but they're much better suited to the task than the human brain. In the event of a failure of a critical component, the computer can pull quietly to the side of the road and signal for help. Heck, even if everything goes haywire and there's an accident, maybe 100 people die per year. I'll take that compared to the current numbers.