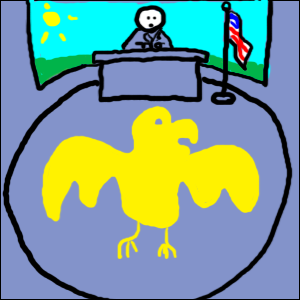 Don't take that as meaning I am against education, because I am not. However, with all of the distractions currently available to the populace it is becoming increasingly difficult for people to fully mature. All of man is born enlightened. In developmental years we descend from a state of divinity as we develop an identity for ourselves and have the illusion of seperation strengthened. A fully realized being must make that descent first, however, otherwise we are just another beast sprung forth by mother nature. What these distractions do (things such as religion and science) really is keep people from waking up. Existence is becoming more and more a race to get somewhere and most people have failed to realize that we are already here. Life isn't about finding a path to the goal, because the goal is the path. Life is motion.
So, on one hand, there are evangelicals and born-agains and all kinds of other fundamentalist religious folk waiting for their salvation to come in the form of a savior of some sort. They are waiting for someone else to come along to wake them up.
On the other hand, you have the scientific folk who are so buried in the quest for truth that they will never realize that truth is all around them. They dream of finding the answer and are so very attached to the dream that they will not allow themselves to wake up.
If you spend years studying painting and know how to mix colors flawlessly and make perfect strokes, you are a technician and not an artist. It is performed from the mind through what you have learned. To become an artist, you must walk away from what you have mastered. You must not practice or think of it for several years. Once you have forgotten all about it, then you return to it. Then you will be an artist. Then it will flow from your being without thought.
In order for humanity to wake up, we must first forget who we are.

If torture was so counterproductive I doubt it would have survived so long all over the world. It may just be sadists who like it but those sadists would probably enjoy sticking sharp pieces of metal into someone more then firing a gun and that practice died out because it was inefficient. Just ask yourself how many fingers you would be prepared to lose before giving up your SA password.

During highschool I went trough a number of different names, all of them politic-related.
I went to a private catholic school, even though I was, at the time, a fervet atheist. Let me rephrase that: I was the only atheist and I was foolishly vocal about it. During all the mandatory religion classes I asked the usual smug questions, and I said the usual smug atheist things (God is an ilussion for people too incompetent to go through life without an invisible friend, the bible is a book of lies that only justifies a reactonary mentality, etc.) I got kicked out of religion classes regularly, which filled me with pride. I was very good a most other subjects (save math), and the teachers loved me, so I was able to get away with that. so, for my first couple of years I was that "Godless kid"
Then I went through my marxist phase. In a mayority of right-wing students, I felt at home stirring up shit. I knew Marx because my father is an Orthodox Marxist and had indoctrinated me since birth. When other kids heard bedtime stories, I heard about the inherent contradictions of Capitalism. again, I was too vocal for my own good. "Godless kid" evolved into "Godless Commie kid"
In my last year, I was reading a lot about Nazi germany, a subject that I found (and find, to this day) fascinating. I was in no way a nazi, but the nazi phenomenon really draw my attention. As a result of this reading, many of my interventions in class began with "Well, in Nazi Germany..."
"Godless Commie kid" evolved into "Godless Commie Nazi kid", an expression that boggles the mind to this day.
Finally, my class decided to have a sort of faux-yearbook (we don't do the whole yearbook thing where I live), with custom titles awarded by the four or five dicks that thought were pretty funny. Most of these titles were derogatory, or just plain silly. Under my picture one could read: "Most likely to try to take over the world"
When said dicks read the class "yearbook" out loud the rest of the class got a hearty laugh. I must admit I laughed too. The best part was that a girl, who was kind of my friend said: "You know what the scary part is? That he would succeed."
I don't know if that was ment as a compliment or an insult.

See this I have issues with. I am one person. Why is there a special dividing line on me that screams DANGER GERMS, whereas the rest of me is a-ok?
Additionally, I didn't see anyone mention the resource cost of washing hands: you need detergent, you've got to dry them, which uses either electricity or a paper towel, and then there's the massive amount of water that would be needed if the whole country started washing their hands like Mr Nicholson in As Good As It Gets.
During the Haj to Mecca, the requirement for a Muslim to attend to proper ablutions and wash himself is suspended, because of the massive need for water when that many people want to wash their hands. Granted, this policy would spread that demand out, but it's still heaps of water. And water has it's own energy costs associated with it too.
I read a climate change book a few weeks back, and one of the points the author made was our lifestyles are such that we think it's ok to use significant energy and release significant CO2 just so we have warm water to wash our hands.
I personally urinate at least 6, usually 10 times a day. I don't wash my hands unless I piss on them: I don't feel the need to waste resources because sometime in the past we decided that we no longer wanted immune systems that were capable of fending off these bacteria.