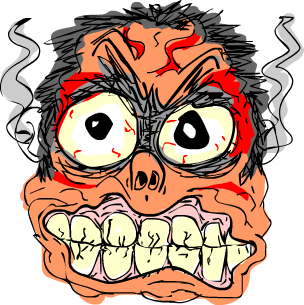 Yesterday began like any normal day. I was skipping two of the three classes I have to sit at home and play videogames with my just-out-of-knee-surgery room mate, eating a great meal and having a great time. I heard a soft knock at the back door, and after I answered it, I see a guy named John.
Backstory on John:
John is someone I met over the summer, through a group of friends back at my home town (I am attending college now.) Me and John always got along well. He is a pretty intelligent, normal fellow who I would never expect anything outrageous from. He liked to smoke a lot of pot and that's about all I knew about him.
Back to the story:
John is at the bottom of the stairwell that leads from the back of my house to my backyard, and he asks me to come down and talk to him. I slip my flip-flops on and go down. He begins staring me in the eyes, breathing hard, and clenching his fists. He asks "You know what this is about?" I think back and recall what it could be about... it was about a girl.
Backstory of the girl:
This summer I was single for the first time in four years, and I took full advantage of that status. I enjoyed hooking up with girls, though I was sure that the girls were always single. John apparently had a crush on the girl in question, who I'll call Paula. She was my main roll-dog over the summer, as we have known each other for years. We went to the beach together a few times, but primarily remained friends. We messed around a few times, but nothing serious and it never changed anything for either of us. I didn't think twice of it because I didn't care about her any more than a drinking buddy and she felt the same about me. She apparently got a few mean myspace messages from John recently, as he was upset and he claimed she "broke his heart." Please keep in mind, there was no relationship here, just a pretty big crush.
Back to the story:
"Yeah, I guess I know what this is about. Paula?" He nods, cocks back to hit me, and stops. I have my arms crossed. "You know what has to happen then? Put your hands up! C'mon!" I told him I wasn't going to fight him no matter what, and that I know he's smarter than to do something like this. He cocks back again and stops again. I tell him don't do anything stupid. He whispers to himself "He's just gonna cross his arms..." He swings at me, knocks me against my house, and proceeds to hit me in my face and head as hard as he can as fast as he can. He hits me over towards the stairs and beats me against the stairs as I see his friends come around the corner. I cover my head as I feel a bunch of impacts, though I don't know if they were fists, feet, and who they belonged to, whether they were his or his friends. He stops, and I stand up, looking back at them. Blood is running down my face, drenching my white-t. I spit up blood on the ground to his feet and stare at them until they run off. For the record, I didn't hit back because I would rather try to protect myself in a four-on-one match-up. I grew up in a bad neighborhood and I know when to fight back and when to just try to do damage control.
I walked into my house to my room mate who, incapacitated, looked up and asked what the fuck happened. I explained. My room mate's father was in town, taking care of him after the surgery, and arrived at this point, taking me to the hospital. Six hours, a cat-scan and three stitches later I was back home. The blood is still all over the back of the house and the stairs.
I haven't been in touch with the gentlemen who did it, though I have been with Paula and most other people that know us. People claim they had no idea that was going to happen, and Paula is especially scared because she doesn't know what John will do next. As far as my condition, though I look like Tom Cruise in Vanilla Sky, I'm fine considering what could have been. My face is swelled up where the first few shots landed and my lip needed three stitches, but I'll be fine in a week or so I think. I plan on filing a police report tomorrow.

Ya some worthless arthiritic greasy faced neckbearded dipshit with a small cock who decided that spending :tenbux: on my title was more important than another box Crispy Creme Donuts or a 3rd helping of Monte Crisco
i guess opposing affirmative action and gang violence sets me on the same level as a Card carrying Idaho National Socialist. I dont care it doesnt bother me. Fuck him. The title can stay for all I care.

How about you stop being such an asshole and recognize that just because you're sick of hearing about it doesn't make it any less significant, in the grand scheme of things? Thousands of people died, it was the biggest, most outrageous, and most gruesome terrorist attack in the history of the world, and global politics will never be the same. It might not affect you on a day-to-day basis in your cozy, contented, and entirely sheltered lifestyle as an average American, but it really has changed everything.
You will probably die before 9/11 loses any immediate significance, and it will be a lot longer before we as a nation go back to living the way we did six years and one day ago.

Sigh, I just don't understand why it's accepted. You have no idea how angry it makes me when I click a link and get RickRoll'd. Especially when it's something really believable and interesting. I click the link and then--BAM! A fucking RickRoll.
I thought we hated 4chan and their shit. Sometimes I get so angry when they prank me, I just want to punch something and I tremble with rage. Then I close the link and sigh, but I feel so empty. My eyes are watering (not about to cry, it's just how I am), and my hands are shaking with sorrow and disappointment as I type this.
Look, I know you guys like to say "So what? It's the internet!" But you have to understand that real people sit behind computers with real feelings. Trolling isn't a game.