Creating Your Own Internet Fetish Subculture 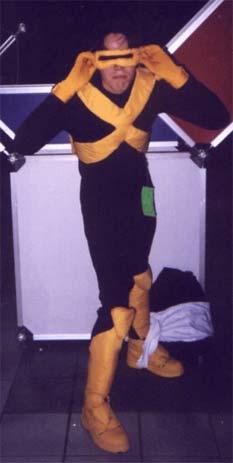 Optic blast!The best way to individualize and strenghten your subculture this while simultaneously developing an inviting feeling of belonging to those who might be drawn to it is to create a jargon completely obtuse to those outside the subculture. Let's continue on with Bobby's example and help him develop a lingo for he and his fellow superheroes trapped in below average human bodies.

Alpha Flight - A member of the subculture so lame that even the spandies find them dorky and annoying. Ex: "Hey Alpha Flight, why don't you go save another cat from a tree."

Mister Impossible - Humorously derogatory term used to refer to male Spandies who dress as female super heroes. Ex: "Yeah, did you see the Wonder Girl in the other room? Serious case of Mister Impossible going on."

Nick Fury - The annoying or belligerent significant other of a Spandy who refuses to join the subculture and instead behaves in a hostile manner towards it. Often shortened to just "Fury". Ex: "Come on Daring Avenger Paul, lose the Fury and let's go bamf."

Olsen - A spandy that comes to conventions and meetings not wearing a superhero costume. Ex: "Did you go to Spandy Ballet '02? It was all Olsens."

Sentinel - Spandy term used to refer to normal people who are not a part of the subculture, particularly those who they assume to be hostile to it. Ex: "I wouldn't go in there; the place is crawling with Sentinels." 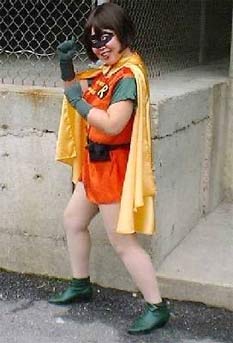 Little less time at the bat-snackbar boy wonder, thanks.With his hip new Spandy lingo circulating throughout his fetish IRC room Bobby can rest easy knowing that gullible dorks with low self esteem everywhere will flock to the subculture. But, what's this?! Someone who doesn't belong to the subculture is mocking Spandies and threatening to sour public opinion by revealing it as a pathetic crowd of sex-starved losers in need of psychiatric help. This is a defining moment for Bobby and his sexual justice league. They could simply ignore the detractors, or explain that they are only doing what they're doing because they're hopeless losers, but this would probably further undermine their position. No, it's definitely time to get serious, and not just about addressing the claims of detractors. It's time for the subculture to metamorphose into its final incarnation.

Up until now the subculture has been predominantly devoted to the fetish that started it all. While this fetish should remain an integral part of the subculture it's come time for the kids at #heroplay to realize that this isn't just about jerking off to drawings of Rogue licking Jubilee's ass, it's a genuine lifestyle. This is the greatest achievement of an Internet subculture because it adds an argumentative gravity to the cause and provides a justification for righteous indignation when people publicly malign it. Just saying you're taking things seriously isn't enough; you've got to codify the subculture almost like a religion. If this means creating an entirely unfounded alternate reality worldview that borders on madness then so be it.

First of all the subculture is not based on a fetish. Sure, a few people might sully the good name of spandies by drawing pictures of Psylocke having sex with Spawn, but these people are few and far between. They give the group an undeserved reputation for perversion. In fact most people in the subculture just dress up like superheroes because it's who they are. Deep inside they are a superhero and they dress like one because it comes naturally, even if this means they look like ten gallons of pudding in an eight gallon cauldron. People have no right to malign spandies for what they do because spandies are simply expressing their true self, not some prepackaged societal sheep like all of the other Sentinels out there.

It goes beyond this general argument though; Bobby needs to incorporate dozens of unbelievable and complex concepts into his burgeoning subculture. Concepts like:

Spandies are genetic descendants of a nebulous species of superheroes that existed during the 18th century. Most spandies have lost their abilities because of the artificial constraints society has placed on them.

Myths about angels and devils throughout Western culture are merely misinterpretations of actual events caused by superheroes.

Ghosts that show up on film as spheres of discoloration are actually "Psychotroids", a race of aliens in collusion with the government to prevent the rebirth of the superhero race.

Once you and your fellow fetishists begin to take yourselves very seriously you will be able to rebuff critics with everything from accusations of hate crimes to mocking laughter at their simple sentinel minds. How could they really expect to understand one as great as you? How can they hope that their cruel barbs will ever penetrate your fortress of solitude above your parent's garage? Their feeble society is obviously inferior to your wonderful world of punching men dressed up as women dress up as super heroes.