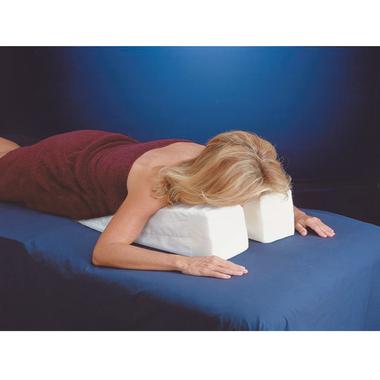 Relieves tension on neck, back and shoulders and lets you sleep like a baby! Patented "air portal" ventilation system allows you to rest face down in comfort while breathing fresh clean air. (Skymall)

P: Most people don't know what to do after the chloroform.

N: I hope the deluxe $69.95 model comes with a washable coverlet to protect against unsightly spills, lipstick smears, and blood.

P: If James Bond were a woman with Lyme disease -- "You don't really think you can EAT your way out of a wedge of brie?" I am sort of assuming she's lazy but maybe this was taken with a sports camera and she's currently ramping off this at like 200 MPH. I'm glad the Special Olympics finally has events for those in deep coma. That towel is toast, though. Do comatose titties flop?

N: Maybe we're looking at it the wrong way, and it's the wedge that's moving. She was skydiving and her chute failed to open, so now they have to scrape her off the awning of a fruit stand.

P: It's keeping her in place on the runway before she flies off to Cairo, but you just know Indiana Jones's girlfriend is going to knock that wedge out of position and he'll have to rescue her from inside the blonde -- after fighting the tiny German working on her, of course.

N: I didn't think of the blonde as in control of this situation, but maybe she is. If she has sharp enough teeth, a little cheese in that slot makes her a low-budget mousetrap. Put a few carrots in there and she'd catch Bugs Bunny ... though he'd probably trick Daffy or Elmer into getting caught in his stead.

P: Her slack body makes me think that she's the one stuck in the mousetrap: her arms, in their death throes, are forever stuck to the glue base, her once-white towel sopping up gallons of blood but also concealing the exact location where the bar separated her vertebrae. Her nails were manicured one last time with their post-mortum growth specifically in mind.

N: That's such a violent image. I prefer to think of the woman-trap more simply: put a few chocolates, a Cathy desk calendar, and a man's paycheck in the slot, and she'll lay like that until she starves to death.

P: This product was designed by bad husbands -- such as you yourself will be -- to prevent their wives from making decoys of themselves under the sheets. "She'll never have enough towels left over to get the head silhouette right, not after using half of the linens to plug the huge hole in this pillow."

N: This lends itself well to pulling pranks at the spa. You get a woman all relaxed and happy, and then you start sliding Dove bars in there. She just keeps happily chomping away and hopefully she won't notice your cocoa-dipped Johnson before it's too late.

P: I like the wedge shape, like you could just slide it under her if she refused to get up.

N: "I ain't doin' nuthin tonight, I'm alreddy on mah bellah!" And then you just swoop it under there and you're in hog heaven!

P: If she stops flapping her trap, you could push the ramp back and forth to simulate a loving head bob. Now that I think about it, that would look like a miniature golf obstacle. Unarousing.

P: Or if the man is also unwilling to do any work.

N: You can just pull the whole thing up like a pair of pants, woman and all.