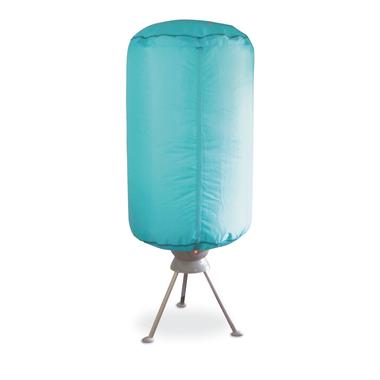 Putting a "new wrinkle" on an old standard, this portable, easy-to-use unit offers drying convenience when you're far from home. Just hang your wet garments, turn on the timer and 900 watts of drying power does the rest. Folds compactly to store under a bed, in a closet, behind a door - even the trunk of your car. A fabulous gift idea for business travelers, RV enthusiasts, campers, boating buffs and more. Also doubles as a room warmer when temperatures plunge. (Skymall)

P: "Mrs. Gordon, this is a model of the virus ravaging your son's body. As you can see, this end latches onto the RNA receptors -- wait a minute, laundry's done. Fold the shirts."

N: 900 watts of power? This is an EZ-Bake Dryer. And I like how they try to play off the heating problem as a feature. "Also doubles as a mini-sauna, filling even the most spacious of hotel rooms with the rich, moist odor of baked wool!"

P: "Doubles as a mock-up punching bag to convince your dad you're not gay." It's a good thing that these fit under beds, in closets, behind doors, and in garbage disposals, because some businessman who likes camping and boating is going to get thirty of these on his birthday.

N: That might be exactly the plan. It doesn't take much imagination to see these rising up and overthrowing society. They have a definite sci-fi feel to them. Someday soon they'll vomit forth their loads of satin blouses and take to the streets for 900 watts of destruction.

P: "Mrs. Gordon, this is actually what's ravaging your son's body. Fold the shirts." They'd disguise their hideout as a training dojo. Some brave soul will face the four-hundred degree heat to listen to their plans of world domination.

N: Then the guy will sneeze and the roomful of Dryoids will turn in unison, their single red eyes pulsing angrily, and the soldier units posted near the exit will unzip, releasing flocks of bloodthirsty tropical bats.

P: He'd have to escape through a revolving door and they'd malfunction trying to find where they'd be easily stashed.

N: I'd be surprised if these aren't essentially military-grade clonepods. After 50 dryer cycles the soldierspawn inside gestates, hatches out and exsanguates everybody in its kill radius. These things make me so uneasy that I think they deserve all the paranoid explanations I can muster.

P: "Soldier RT32 reporting in. Besides a few bruises from being girl-punched in my second trimester, I am in good health. And I'm locked in the trunk of a car." I doubt the creation of this product is anything that sinister. Somebody probably just put the cover back on their aluminum Christmas tree and wished that it would do their laundry.