Of course I am not gonna give up all the good ones here, because I got to get PAID son. Levi wants to fly and these wings ain't free.

So here are some factoids. Consider these to be samples of just some of the iceburgs of which these are only the tips.

Anyway, those are just the boring ones. I've got way better facts I could hook you dudes up with if you got the cash. 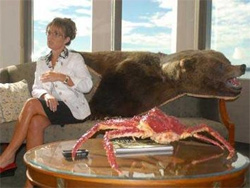 Back to the crab monster and the bear corpse.As for me, well, I am sad to say folks this is the last time you will probably hear from me. The whole family is goin back up to alaska and up there the internet only works for like 2 months of the year. We got to check all our email and do all our banking before the magnetic fields or aurora borneolis or whatever fucks everything up again.

Honestly I was running out of shit to say anyway. Maybe I would have come up with some new shit if I was a duke and had my own wizard and a palace and shit, but that was not meant to be. I hope whoever the black dude makes into a duke is as cool as me. Ha ha ha doubt it.

Mrs. Palin will be cool. I know some of yall are worried about her but she will be just fine. She has a huge beautiful house she got the contractors from that hockey rink to build for her for free, she has got a giant ass crab monster in her office to cheer her up, and any time she gets really freaky and wants to hook me and bristol up with some kinky shit I am down. I will even let her videotape it, but todd cant be in the room I cannot keep goin with that fuck watchin and making all them loud breathing sounds.

Fuuuuuuck. Anyway, I'm gonna go get tore the fuck up and out.