Oh here’s one, I fight a dyke at the meat packing plant: 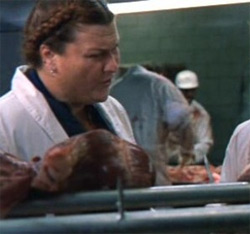 this is that exact bitch I don't know why her picture is even on the internetWe were walking through the meat packing plant.

“Just a rule of thumb” I said for some reason I can’t remember.

“Just a what?” Said a dyke who was big and mean.

“Rule of thumb, you know what the fuck that means don’t be retarded bitch” I said not meaning any offense.

My irish brother made a face about what I was saying and the dyke looked meaner.

“Rule of thumb is the thumb a man used to beat up a woman (his wife) with when she wouldn’t listen to him,” the dyke said cracking on her knuckles and getting ready to throw a beating.

“Dodge this” I replied and punched her in the juggler with my thumb and she went out like a light and fell to the ground.

“Damn” my irish brother said as the dyke farted fearfully.

That shit really happened to me true story. I got writ up and everything for that one. Theres also all kinds of political intrigue tell all shit if that’s your thing. I got that shit. 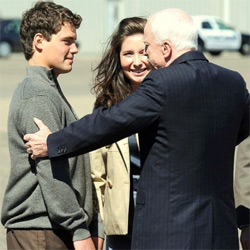 And then this old pale dude came right for us and I thought he was gonna like spit digestive juices on us and dissolve our bones but it wasn't quite that badSarah Palin climbed out of the tanning bed at her house and her sexy skin looked like a pair of pantyhose full of oranges. She was relaxing in her micro-kini that just barely covered her titties at all and went right up her butt.

“Fuck I gotta fuck” she told me and started wanting to fuck.

“I cant right now because todd is looking at me” I said and pointed to the giant windows that were like a whole half of the house and todd was right outside staring in holding some hedge clippers like they didn’t have 50 gardeners.

Mrs palin looked and waved to todd and todd waved back.

“Oh he don’t mind he like to watch my holes get plugged by a verbile young stud like you come and give it to me with the hot beef” she said and flexed her holes at me.

Then the next day we went to see that old dude about politics and team of mavericks or whatever. I thought that shit up mrs palin was like “hes a maverick and I am too” and I was like “if the usa had a whole team of mavericks goose would still be alive.” And then I left because Bristol was getting baby cramps or whatever and I wanted to stop at applebees and get some steak fajita before they closed.

Fuck it gets better and better, trust me. I have all the inside gossip on the campaign as well as shit you can’t hear nowhere else because nobody has a scoop worth shit. Tank says this book is worth like two or three million, easy, but I am willing to sell it for the sale price of a million. If yall run a New York printing press then give me a call.