Requiem: Bloodymare has shown me that I can't spell "requiem" to save my life. It also has splatted enough virtual blood on my screen to give a vampire an erection for days. With blood and violence as their main selling point, Korea's Gravity has spawned another cookie-cutter MMO with an added twist: excessive amounts of gore. 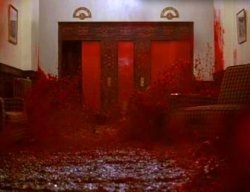 BLOOD!!!Gravity finally managed to create a game lacking cutesy blobs, kittens, and anything else you aren't supposed to want to bludgeon with a stick. However, no amount of blood can make up for the anime-looking characters and a grind that takes all the fun out of seeing body parts fly across the screen. Does every game out of Korea really have to encompass anime in some form? At this point, if a company in Korea wanted to show some kind of innovation they would just need to remove anime from their game.

I can't explain to any of you how much I absolutely hate anime and everyone who watches it. Odds are that most of you fall into this category and should be ashamed of yourselves. Once, I had a Japanese class and I had never felt so segregated in my life as I was surrounded with people who claimed that watching anime made them cultured and allowed them to learn Japanese. Even people who watch the stupid crap need an excuse to watch it, showing that even their audience has to rationalize something so stupid. Wait; what was this article about again?

Oh that's right, some stupid game that tries to mask it's flaws in a sea of blood. I admit that covering an outdated graphics engine with blood is pretty smart. Look at Doom 3, the developers made that game so dark that people actually thought it had amazing graphics. However, in Requiem's case, no amount of blood can make you forget the painful feeling of grinding your life away killing the same creatures over and over again. Apparently some kind of dark nightmare mode exists in the game but I never saw it so I can't tell you if it sucked just as much as the normal mode (probably). 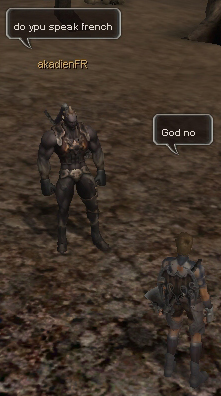 Though quests do exist in Requiem, most have you talking to the exact same person you got the quest from. After that they may have you walk across town to talk to someone else but only a few quests actually had me do tasks. However, these tasks always consisted of "go kill x number of these guys" which we all know as the most creative quest structure in MMOs. Don't get me wrong, I never expected an MMO out of Korea to actually have some kind of creativity or thought put behind it but I am always waiting for that special game to surprise me.

In fear of stepping too far from the old Ragnarok Online outline for all Korean (and Gravity) MMOs, a job class system is in place to make sure you can't do jack shit until level ten. I couldn't even buy usable weapons or armor from merchants until level ten and though I never had to waste skill points learning how to sit down, most of the early game consisted of right clicking on a monster and waiting until it died in an explosion of blood that sent limbs flying in different directions.

Unlike Gravity's other shitty MMOs, Requiem's open beta didn't last five years and I only had time to reach level eight before all the servers were shut down. I would say that I was disappointed but I think relieved fits this situation a bit better. So to you assholes sending me emails saying that I only play these games for ten minutes, this time it wasn't my fault.

The Requiem community had the same consistency as any MMO I have played which never makes this job any easier. Smothered by "KAWII!!! ^___^" and people sadistically raping the English language, I tried to avoid virtual human contact at all costs. The problem with MMOs is that every community usually divides into two groups: the role players and the near illiterate. Both groups are just as annoying as each other and rival one another much like street gangs. Well, that is if street gangs were full of nerds that argue about console systems and which social engineering site is the best (hint: they all suck and are for fags).