Other than freedom hating terrorists, the world has one common enemy:Chinaglobal warming. The good folks at IBM along with some groups no one has ever heard of created an MMO-like game to teach children how to battle the energy crisis. From turning off power strips to shooting goo at smog creatures, this incoherent game stands no chance at informing children in the slightest. 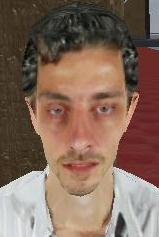 One word: Cocaine.Usually in business, someone looks at productivity versus cost and then fires a ton of people while screwing the remaining employees out of retirement so they can have an extra house on the coast. The joke is on them, however, since global warming is sure to wipe that house off the face of the planet... in a few thousand years. Apparently some schmuck doesn't keep track of this productivity quotient when it comes to PowerUp: The Game since I am fairly sure it wastes far more energy than it could ever save.

Anyhow, PowerUp fails to teach children anything other than tampering with computers or disconnecting power strips when not in use. Imagine if that little fucker ran around your house pulling everything out of the wall just because he saw some poorly rendered "smog monster" in some shitty game. However, if your child were dumb enough to scare that easy, I am sure you have many more serious problems.

PowerUp immediately makes the first mistake when it comes to educational games: they pushed all the fun to the side to make room for education. However, no educational purpose in this game exists due to complete incoherence and the lack of instruction. One minute you are laughing at some crippled guy in the main lobby and another minute you are bumping into propellers in a landfill. I can honestly say the best thing about this game is that crippled guy in the lobby who, by the look on his face, has been ready to die for years now. 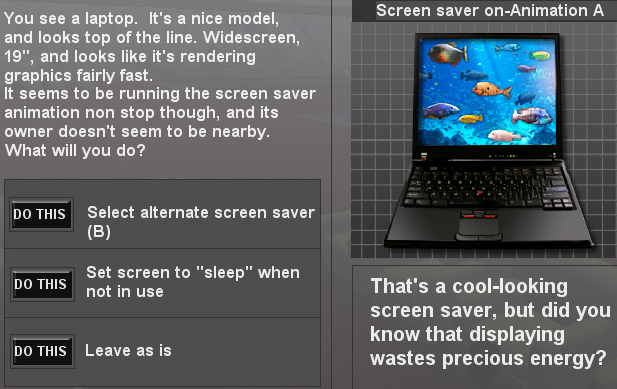 Here is a lesson children: IF IT ISN'T YOURS, LEAVE IT THE FUCK ALONE.

The beauty of MMOs exists in the ability to suck someone's time into oblivion due to an ever-expanding game with limitless activities (or doing the limited activities over and over again). I managed to accomplish everything PowerUp had to offer in roughly 45 minutes and I still want that time back. I only bumped into one individual while playing this game but since I could only select predetermined phrases to talk with, our conversation pretty much went like this:

Remember that one time your class went to the computer lab in 8th grade and the teacher told everyone they were going to play a video game? How about the assumption it gave you that today was finally Oregon Trail day and you skipped along to the lab with high hopes of putting your friends' names in the game and laughing when they died of snake bites or syphilis? If so, do you also remember that upon reaching the lab all of your dreams were quickly shattered and the most horrendous hour of your life as a child had just started? Well I don't since I grew up in a shitty town named Sylva, North Carolina and computers were too "fancy." However, if we did have computers than I am pretty sure some crappy game like PowerUp waited for us instead of the coveted Oregon Trail.