Around nine or ten months ago, Rob passed the MMO Roulette off to me and Lowtax somehow thought I wrote well enough to give me a chance. For some reason I am still here and my legacy has been fortified with my immortalization as an NPC in a crappy MMO. In fact, it was the very first crappy MMO I ever reviewed and I am delighted that I pissed off the creators of Gekkeiju Online so much that I now have an NPC named after me.

I have received various emails since I started writing for Something Awful and though I cherish them all, one sent to me by Sergio has propelled itself to the top. The email was really long so here is the important part:

[...] A few minutes of killing "sukmywang" later, I decided I really needed to go on and search a greater adventure. I headed towards to where the oh so dreaded ogre captain was supposed to inhabit when I saw -it-. Scuttling around the camp was a level 1 NPC called Khad. Yeah. Mousing over it would display a text that said something along the lines of "the awful n00bie is the orcs sex slave". That's when I decided it was enough "fun" for the day and proceeded to close and kick the piece of crap's ass out of my computer.

Wow, I guess you must have caused a very good impression to have an NPC in your name. In WoW (and I guess you already know that) such a monumental effort by the programmers/developers is only awarded to either rock bands, dying/dead players or passed away developers.

Thrilled at this news, I immediately posted the email on our forums and within the hour, Kamoc posted various screen shots in game to confirm that I had indeed been added as a permanent NPC to Gekkeiju Online. 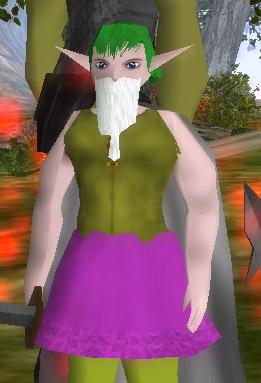 I have been known to have sex with orcs but I wouldn't call it slavery.

I do have an ass crack! My NPC counterpart is dead on! The resemblance is uncanny! 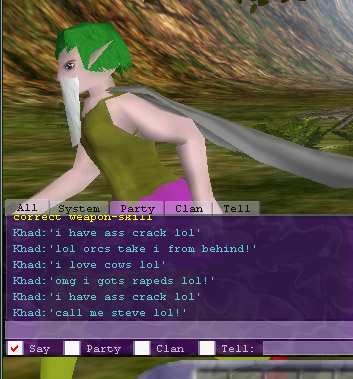 I am more than honored that I now have an NPC named after me in a crappy MMO and this is the best thing that has ever come out of writing the MMO Roulette so far!