When looking for terrible MMORPGs, I primarily focus on games reeking of negligence and eternal shame... Goonzu was my jackpot. Very few communities live up to it's awfulness and the effort involved in production was little more than copying Ragnarok Online and changing a few models. The Goonzu website packed such an abundance of anime onto my screen, I wanted to vomit. I could not come up with any doubt in my mind that I would soon be killing cutesy monsters for hours on end.

All I need is a cute character in a video game. I also like to stimulate economies.The company to blame for Goonzu's creation chose to name themselves "NDOORS," perhaps because that word accurately describes the location their fan base absolutely refuses to leave. A few years ago a horrible game called "Ragnarok Online" lingered in a free beta test for years plaguing the internet. I remember being so bored that I ended up downloading a program to level up for me instead of allowing myself to suffer through that tedious chore.

In Ragnarok Online you basically skip around in a pathetic 2D world and click on enemies awaiting their slow, eventual death. Upon reaching level five or so you learn how to sit down. Since the grueling, painful birth of this revolutionary game, every MMO out of Korea has been nothing more than a sad twin of uninspiring garbage. Due to Asia's unholy fascination with cloning aborted gaming monstrosities, Ragnarok Online basically serves as Korea's World of Warcraft.

After downloading the client, I scoured the Goonzu community for the typical infestation of terrible fan art and pedophiles. Unfortunately, their awkward forums resemble the world's worst Geocities guest book, with all replies formatted like poorly translated Youtube comments. Filled with people complaining about the game, the forums served as a dumping ground for whiny gamers and their theories that the game's inadequacy resulted from incest. 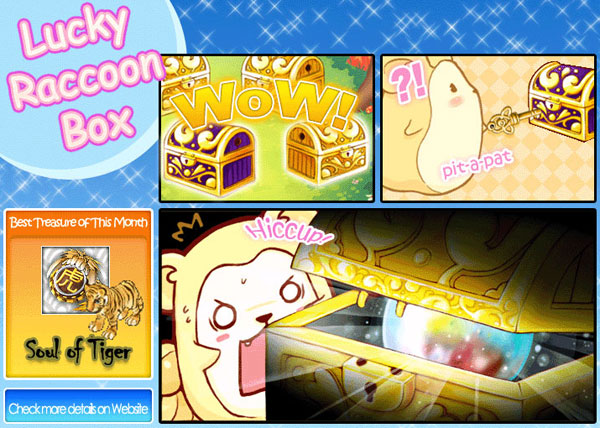 Only lucky people find the lucky raccoon box. I hate that dumb box.

Six hours after starting the 800 megabyte download of the Goonzu client, I decided to try out the Crysis demo. The 1 gigabyte demo was ready for installation in less than an hour, while Goonzu continued to take another seven hours. I understand that downloading a file based in Asia can take time but I can't remember any other crappy Korean game taking this long to infect my hard drive.