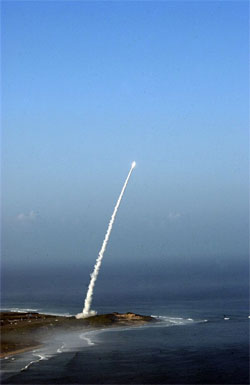 The idea of defending the United States from incoming strategic missiles is not new. Ronald Reagan's Strategic Defense Initiative was famously used to demonstrate the superior technology and unlimited capital of the United States in a high-stakes political game against the Soviet Union. A much more modest version resurfaced in the closing years of the Clinton administration. Referred to as "National Missile Defense" or the "strategic missile shield," this version relied entirely on ground-based interceptor missiles. It received limited financing from Clinton, but was embraced fully by George W. Bush.

Since 2000 the cost of the program has ballooned with every new projection and currently sits at $62.9 billion for 2002 through 2009. Despite the mediocre results of tests in which the interceptor was given unrealistic advantages the first ten interceptor missile silos were constructed in Alaska by 2006. Delivery costs of the Northrop-Grumman system is approximately $110 million per missile.

The strategic missile shield's inclusion on this list is all about the timing. The threat to the United States from ballistic missile attacks, particularly from Russia, is likely at its lowest point in 50 years. The United States was attacked in 2001 by terrorists and has since been under the supposed threat of nuclear attack by infiltration. The billions of dollars spent on the missile shield will do absolutely nothing to prevent these attacks. It's as if the United States heard it was cold outside and chose to bring an umbrella to keep warm.

Some balding fat guy with a shelf full of Tom Clancy books, such as Tom Clancy, might argue that even though the missile shield does not protect us from current threats, it does protect us against potential threats. Ignoring the fact that we have yet to develop a "national alien raygun defense" to protect against that potential threat, there is no real suggestion that the interceptor missiles will function correctly.

From January of 2005 to September of 2006 the missiles failed in 2 out of 5 tests. To date, the missiles have never been used in a test that realistically simulates a strategic missile attack. They have always intercepted dummy missiles without countermeasures or decoys. In other words, under absolutely optimal conditions the missile defense system works 40% of the time. The US is proceeding with plans to situate defense missile silos in the Czech Republic and Poland to offer protection to Europe. Noting the high failure rate in testing, the Russians have pledged to target the sites with sufficient nuclear missiles to render the missile shield mathematically useless.

No word on whether the Russian missiles might use countermeasures and decoys. 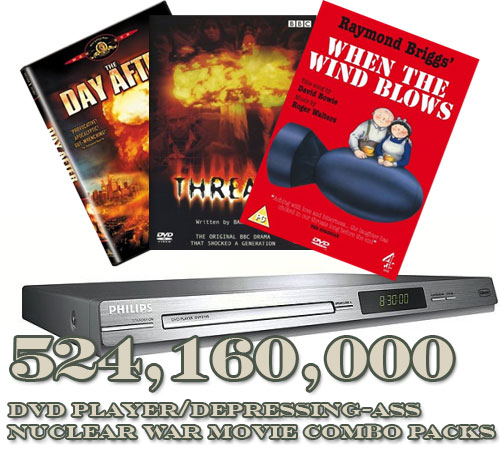