The 14 Most Awful Moguls 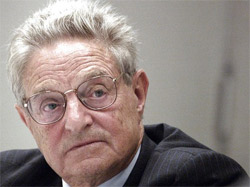 According to Forbes, American financial and investment mogul George Soros is the 80th richest person in the world, worth an estimated 8.5 billion dollars. To give you a clear idea of just how much money that is, Soros has enough dough to buy an Amazon Kindle preloaded with a copy of Garrison Keillor's book Pontoon for every man, woman, and child in Syria. That's almost 20 million people in an impoverished country being given a modern technology that will transport them to Minnesota to discover the soporific splendor of Lake Wobegon.

Alas, we won't be hearing President Assad talk about lutefisk anytime soon, because Soros is only interested in spending his money on two things: making more money and politics. Both of these pastimes have earned Soros a reputation as an exceptionally ruthless manipulator in two fields full of ruthless manipulators. He is willing to use his immense fortune to get whatever he wants.

In the realm of business, Soros gained his fearsome reputation by going mano-a-mano with the Bank of England. On September 16, 1992, Soros dumped 10 billion US worth of British pounds onto the market, prompting a mass selloff by other speculators and nearly causing the collapse of the British currency. I don't pretend to comprehend how currency speculation works, but the event became known as Black Wednesday in England. 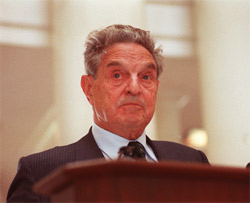 The incident earned Soros a reputation as a villain of business, sort of like a currency warlock. Soros has gone on to pull similar schemes in Asian markets and has earned a reputation as an "economic war criminal" in Thailand. He was also convicted of insider trading in France, although he continues to fight this conviction in European courts.

Ironically, it's his less clear-cut offenses in the world of American politics that have earned Soros a reputation as a sinister manipulator. Soros bankrolled several charities in Eastern Europe that fought against Communism in the 80s and 90s, but when he turned his attention to the political scene in the United States he focused on overthrowing George W. Bush. Soros has dumped tens of millions into liberal political groups like Moveon.org and was quoted before the 2004 Presidential election as saying that he would give up his entire fortune to ensure the defeat of George W. Bush.

Whatever your personal opinion of Soros, it is impossible to give him a higher spot on the list because of his extensive philanthropy. Soros has donated over six billion dollars over his lifetime to fighting poverty, both domestically and abroad, and to fighting for democracy and civil liberties in nations with oppressive governments. 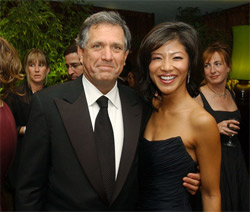 Since 1995 he has been leaving his messy fingerprints on Warner Brothers, Viacom, and now the massive CBS umbrella. These days he is president and CEO of CBS Corporation, one of a handful of US media conglomerates responsible for producing the majority of American entertainment content internally or through a constellation of subsidiaries.

Moonves is the Kwisatz Haderach of entertainment executives, the result of a century-long breeding program designed to eliminate the peculiar genetic defects that cause some human beings to want to enrich lives and celebrate art. He inhales that art and creativity and exhales a hypnotic cloud of toxic vapors to pacify the masses and increase profitability. He is lauded by the industry for taking CBS back to number one in the networks with brutal purges and a scorched earth policy.

Moonves is responsible for such cultural cornerstones as Wings, Survivor, and the US version of Big Brother, which he spun off into a marriage to host Julie Chen. He is the brain trust behind the shift to high-margin reality gutter trash and wailing mind-rot like CSI and its filthy clutch of offspring. He thinks Two and a Half Men is the funniest comedy on TV, because people watch it. Moonves helped drive Howard Stern off the radio, attempted to sue him as he departed, and then chose to leave CBS radio fallow in the face of financial difficulty.

Everything Moonves comes in contact with, even peripherally, turns to the same sort of bland non-challenging garbage that is built out of calculated contempt for its consumers. If you watch a Moonves show or listen to a Moonves radio station, you are buying into the idea that you are too stupid to deserve anything better.