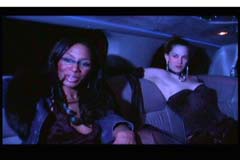 Yep, these ladies look entirely trustworthy.Now, you might think that with all the people suddenly appearing out of the woodwork to get their hands on little Petey in one way or another, the boy must have some sort of special properties. He doesn't, so stop being dumb. Alex is the special one. Some call him "The Holy Man." To others, he's "He Who Was Blind But Now Can See." To others still, he's "Smelly Hobo." Whatever the name, he's the man of the hour, and the inhabitants of the convenient limo are just thrilled to meet him. They're all leather- and latex-clad party girls with nice sensible names like Nocturnal, Shy, and Hyena. Now, I don't claim to have a firm grip on the New York party scene, but I have a little trouble imagining that any woman in her right mind would actually call herself Hyena.

Being the gracious folks that they are, the party girls take Alex and Petey to the world's lamest rave. Seriously, this thing makes the moronic rave scene in the second Matrix movie look like the party of the year. 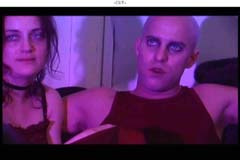 It's a bald Giovanni Ribisi! And a girl who needs a shower!Naturally, this party is nothing more than a chance for another faction to get involved in little Petey's plight. See, Alex represents the Holy Bums Guild, the psycho nurse was a delegate from The Hippocratic Oath is For Losers Party, the creepy bald dude and fat guy were there on behalf of the Creepy Bald Dudes and Fat Guys Lobby, and now it's time for the Poorly Made-Up Quasi-Goth Contingent to throw their hat into the ring. Their leader, Anikim (who happens to be bald, but don't be fooled - it's his crappy makeup that defines him) is very interested in the scroll that Alex carries. He explains that he and his lame raver posse are actually evil spirits, the half-breed children of fallen angels. He wants Alex to talk to God on their behalf and get Him to give them a break, since it was their parents who violated His will, not them. In exchange, Anikim will& I don't know& tell Alex where Matchet is, or something. I'm not sure. His end of the bargain is never really clear. Oh, and also, he wants the boy. I mean, that practically goes without saying. Don't ask me why he wants the boy, though. I couldn't tell you. Frankly, at this point, I can't tell you why anyone wants Petey around. Honestly, the kid's kind of annoying. But, since Anikim and his brood seem to pose no real threat other than their power to make limos appear at opportune moments, Alex has no problem refusing the bargain and making a break for it.

Almost as soon as Alex and Petey get back on the street, they are attacked by a gang of demonic homeless people. It seems that virtually every element of society is in some way related to this vast supernatural conspiracy to kidnap Petey, despite the fact that, as I said, there is nothing special about this child. He is not the Chosen One. He is not the Messiah. He is not the Child of Prophecy, Destiny, Fate, Wonder, or Power. He's just an ordinary kid, possibly asthmatic. 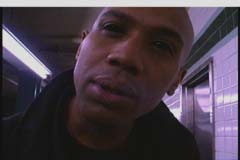 Honestly, I think this whole movie came about as a result of a colored contact lens surplus.Alex manages to run into the one homeless person left in the city who isn't a supernatural creature in disguise, and this helpful chap leads them to relative safety. Leaving Petey in the care of this nameless, chain-smoking drunk, Alex goes off to find this pesky Matchet fellow. We cut back to Anikim and his pack of losers, only to find them gyrating around one another while some black dude in a powdered wig sings way too close to a microphone to be understood. Perhaps his song lends some insight into what the hell is going on in this movie. We'll never know.

While Alex is wandering around looking for Matchet, Bald Dude and Fat Guy kill the helpful homeless man and presumably kidnap Petey. I can't be too sure about that last bit, but since everyone seems to basically forget that Petey exists until the end of the movie, it doesn't seem like a big deal one way or the other. 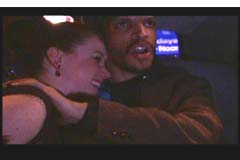 "Must... withold... natural... mojo!"In any event, Alex finds himself once again staring at the rave crew's limo. Despite all common sense, proper judgment, and any sort of human decency, Alex gets in. Anikim is waiting for him inside, along with a bevy of drugged up, if somewhat doughy raver chicks. One of them is instantly all over Alex, but he does his best to resist her sweaty, ham-scented charms. Anikim blathers on about something useless for a while, probably something about wanting to tempt Alex into helping him, but frankly he speaks too slowly to understand, and Alex isn't even listening. He's too busy trying to stop some random skank from humping the side of his face. After he leaves the limo, Alex curses God for granting him his sight. If only he didn't have these damnable working eyes, he wouldn't have been tempted by the writhing girls in the limo. He knows what he must do. Falling to his knees, he jams his white contact lenses back in - I mean, he blinds himself somehow. Just to recap, Alex prayed to God to repair his sight, had his vision for like four hours, saw a woman for the first time in his life, got a chubby, and immediately blinded himself. Way to appreciate God's miraculous gifts, there, assface.

Now, you might be asking yourself, while all these various supernatural entities are looking for Petey, where the hell are his parents? Well, I don't want you to think that they're just sitting on their asses. They actually do go to the cops, but since Petey's disappearance doesn't fit the mold of any of the child abductions that have been going on in the city lately, the police aren't terribly concerned. Naturally, the police are idiots and don't know what they're talking about. If only they were homeless or drugged-up ravers, then they'd have all the info. Still, Petey's dad (whom I shall call White Dad) isn't content to just hang around a police station, letting the dregs of the city do his work for him. He takes to the streets, searching for his son by hitting up the most reliable sources he can find, starting with the flannel-wearing Jesus Yahoo in Times Square. Naturally, the Yahoo has all the answers. Not only does he tell White Dad who to ask about his son, but also where to find him.

As directed, White Dad finds Alex in the shadow of the Brooklyn Bridge. Alex, or He Who Once Was Blind And Then Could See But Now Is Blind Again, tells White Dad that his son is in the hands of the Seraphim, a mighty order of angels. He's not. Let's just make that clear. For starters, as far as Alex knows, Petey should still be with the helpful homeless guy. Also, while there are vaguely angelic forces in this movie, there are no Seraphim. Still, you can only expect a certain level of accuracy from a guy who poked his own eyes out because he got a boner.