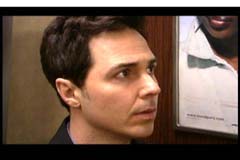 Hey, at least White Dad looks for his kid. White Mom just goes back to the hotel and raids the minibar.White Dad and Alex take a train to some pointlessly chosen destination. On the way, the psychotic nurse reappears and draws a small amount of blood from White Dad, then jumps off the train at the next stop. White Dad gives hot pursuit, but the nurse is nowhere to be seen. Instead, he bumps into the Times Square contortionist from the beginning of the movie. Naturally, the contortionist chases him. Then, suddenly, White Dad is back on the train with Alex, as if nothing had happened. I'd write it off as some sort of dream sequence, except that later conversation confirms that it all really happened. In fact, Alex tells him he got off light. That nurse once stole one of his kidneys. Yup, just like that. He just throws it out there. I'm telling you, the only rational explanation is that director Albert Johnson is beginning to show his true colors. I'm telling you, don't take your eyes off him for a second.

Despite not having any particular clues or direction, White Dad and Alex eventually make their way to a club, where they find the dead bodies of many of the lame ravers. Anikim is waiting for them, but he is no longer possessed by an evil spirit. Now he's just some guy in bad makeup. He tells them that Petey is a captive of "The Beast," then shoots himself.

"But Greasnin," I can hear you saying, "Why would all the evil spirits leave their hosts? And why would the hosts kill themselves? And how did Alex and White Dad know to go to that specific club? And who is the Beast? And why did the nurse take White Dad's blood? And what the hell has been going on for the last eleven paragraphs?" Well, you know what? You ask too many questions. 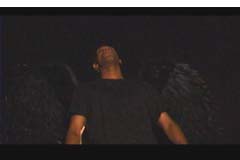 Black wings = badass. Don't try to fight it.Alex deduces that Matchet has Petey, and - why not - all the other recently abducted children, too, and that he's going to kill them all in order to piss off God. White Dad, not to be outdone, somehow deduces that this Matchet fellow must have them in Central Park. If you've been following this review, first of all, major congratulations, and secondly, you've probably guessed that both of these deductions, while based on absolutely nothing, are one hundred percent correct. Alex tells White Dad to go to Central Park without him, since his blind ass will only slow him down. Maybe he should have thought of that before he poked his own damn eyes out, hmm? Not that it matters. They both end up in Central Park at the same time - White Dad on foot, and Alex via teleportation, courtesy of Bald Dude and Fat Guy, who have a particular interest in this matter.

Our savior! Wait, I'm sorry, I meant, our savior?Yes, it seems that Bald Dude is actually Matchet himself, and sure enough, he is planning on killing all the children, whom he has tied to trees. Matchet is a former angel who has turned to evil, and like every angel in every vaguely horror-ish movie ever, he is pissed that God likes humanity better, so he decided to register a complaint by killing children. Let me make it clear that the identity of the children is entirely unimportant, and he could take his pick of any of the millions of kids in New York City. All the fuss over Petey has been completely useless. After all the searching, White Dad doesn't even try to stop Matchet. He knows he's out of his league. He doesn't even have a proper name.


Seeing (or more accurately, feeling) his opportunity, Alex finally busts out the scroll an reads God's proclamation, despite it being (a) in an unknown language, (b) still rolled up, and (c) not in fucking Braille. I mean, you think God gave him back his sight just to be nice? It doesn't matter. God's decree that Matchet be forever damned doesn't change a thing anyway, and Fat Guy quickly knocks Alex out. Fortunately, that's when flannel-wearing Jesus Yahoo shows up to save the day. He bores Matchet into disappearing in a burst of flame, then vanishes himself, showing that he, too, has magical powers.

That's where the movie ends. Despite being confusing as hell, it seems like Matchet has been somehow vanquished, albeit not by any of the actual protagonists, and all the abducted children are safe. Sure, the scroll ended up being useless, and God probably could have saved a lot of time and effort by just sending the flannel-wearing Jesus Yahoo instead of some blind vagrant, assuming that the Yahoo isn't God himself, but that's not important. Petey can go home with his dad, the other children will probably find their ways home, too, and everyone is safe. Still, I just can't shake this feeling that I'm forgetting something...

Albert Johnson is a shyster of the first degree. While I've seen worse acting jobs, he coaxed performances out of his actors that were just wooden enough to basically become background noise, making it almost impossible to pay attention. Then he gave them dialogue that consisted of one overwrought, pretentious, bludgeoningly sanctimonious speech after another, ensuring that anyone who managed to tune in for a moment would instantly tune back out. Just to play it safe, he threw in plenty of music - pretty decent music, too - and made sure that it was always loudest when people were trying to talk, thus drowning out any snippets of information that might help an inquisitive audience member figure out what's going on. Lastly, he constructed a plot so convoluted and rife with the conflicting, clashing motivations of so many underworld factions that no one with even the most tenuous grasp on their sanity could possibly suss it all out. The end result is that you are forced to spend so much energy just trying to follow what's going on onscreen, you forget about what isn't going on - namely, the resolution of the biggest part of the plot. Saving a few kids is nice, but they'll all die anyway when the city is eradicated in a couple days, and so will every other living creature within the city limits. The Wrath of God doesn't have a great survival rate. That sort of seems like the bigger issue. I guess you have to hand it to Albert Johnson. He plays a mean shell game. Just don't trust him around your valuables.

Oh, and one last thing: I'd also like to point out that throughout the entire course of this movie called Acid Rain, there is absolutely no mention of either acid or rain. Fantastic.