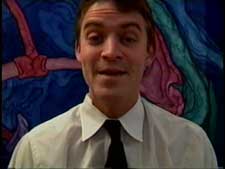 John needs an "off" button more than anyone alive.At the campsite, John extols the virtues of Ted Nugent until he finally gets the message that Mandy would really rather discuss the finer points of his johnson when she takes off her top. There is then a full fifty seconds of film devoted to zooming in on one of Mandy's nipples, then zooming out and zooming in on the other one. Fifty seconds. The average American attention span kicks out at six seconds. I think it really says something about the filmmakers that they would use the time they could have used to turn the viewer's focus to seven additional subjects to focus entirely on Mandy's breasts. Specifically it says that they like boobies. And who doesn't? John eventually takes action, but alas, the sex scene is missing. The actor who plays John, who also happens to be the film's editor, explains to the audience why the sex scene is missing. It's another absurdist take on the genre, and it's kind of funny, although several thousand times too long. I have my doubts about whether that was originally written into the script or if they threw it together after Johnboy blew some editing call and messed up the tape of the actual sex scene. Either way, the average American attention span is still six seconds, and if I'm not going to watch boobs for fifty seconds without getting antsy, I'm sure as hell not going to listen to John pussyfoot his way around this monologue for three and a half minutes. Let's move on.

Leroy and Lisa find a nice spot in the forest. Or rather Grant Woodhill tells them it's a nice spot and that they should make out there. Seriously, you can hear him giving them their direction. That's a stamp of quality, right there. Beautiful. Meanwhile, Sammy staggers through the woods with big yellow tent spikes in his eyes. He manages to avoid walking into any trees, but what's even more amazing is that in his suffering, his shorts take on a life of their own. In one shot, they're around his ankles. In the next, they're riding comfortably around his waist. Then they're on the ground again. Then they're up again. It's a strange world we live in, that's for sure. 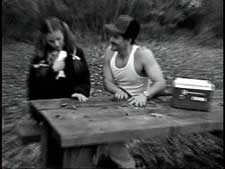 Ah, other people's childhood trauma. You're always good for a laugh!

Mandy walks alone through the woods. This is where I start to get confused. Well, actually, I got confused during the first scene in the movie, but I was able to write that off as general incompetence. I can't tell if Mandy and John actually had their sex or not. She wanted it badly enough, but now she seems depressed and she certainly doesn't look like she's been engaging in any physical activity. She sits on a log and reminisces about her hilariously French stepfather who sexually abused her when she was young. It doesn't sound like much, but trust me, that flashback is absolutely sidesplitting. At least, the cameraman seems to find it funny. The best part is after the flashback, when Mandy mutters, "My backstory sucks." See, that's a touch of comedic genius right there. That's the sort of thing that makes me think the team behind "Back Woods" has some potential, which almost makes the rest of the movie even worse by comparison. And then there's this: we see John in the tent, and from the camera perspective it looks like he's being ridden like a bronco. But Mandy's outside, so either he's masturbating with remarkable vigor or there's someone else we don't know about in there. In any case, when he's done he invites Mandy in for a friendly game of Scrabble. Ah, now we're back on solid ground!

Speaking of solid ground (I am and will always be the segue king!), Leroy and Lisa are going at it on the forest floor. Luther finds them and knocks Lisa out with one swing. He then tears off Leroy's ears and screams into them, causing Leroy to bellow in pain. Oh, then he rips out Leroy's heart. So all in all, this is not a great scene to be Leroy. We then flash forward a bit and find that Luther has Lisa tied to a tree. When she comes to, he rips open her shirt and eats her breasts. Literally. As in bite, chew, chew, chew, swallow, digest. And then he does what appears to be a touchdown dance, which is wholly inappropriate. We do a touchdown dance after setting someone's ovaries on fire. Eating breasts only calls for a samba! Shame on you, Luther! 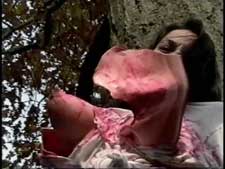 This is a low point for us both.

We snap back to the campsite just in time to find John rubbing one out again. This guy's a machine. Mandy comes running up to the tent all a-flutter, apparently having found all of the dead bodies. This one confuses me. If they wanted to pad out the movie, why not show Mandy finding one or more of the bodies? And when did she go for a long enough walk to find any of them? And who won Scrabble? ANSWER ME! There's no time to ponder these questions, as Luther appears on the scene. He knocks Mandy to the ground by throwing Cannonball Boy's head at her, then chases John into the woods. When he finally catches him, he points him toward Luanne's corpse, which now has a Mangina mask in place of its crushed head. Luther indicates that he would very much like John to perform cunnilingus on his mother's corpse, but John respectfully declines on the grounds that he would rather be killed than put his lips on a dead box. Luther, always willing to comply, pinches John's neck until his head pops off. Because that's possible. He then returns to the campsite, where Mandy is waiting to weakly pat his butt with a stick. Amazingly enough, this does not stop Luther's rampage, so Mandy runs back to the van. After tuning the radio to an appropriate song and fixing her hair for a couple minutes, she rams the van into Luther, slamming him into a tree. Finally safe, Mandy then hitches a ride with the first random guy to pass her way.

Sammy is still wandering through the woods with tent spikes in his eyes. 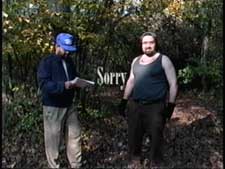 They said it, not me.

As the credits begin to roll, two guys pull up to the campsite in a white van. One of the guys, who is in reality a foreign exchange student and speaks very little English, stumbles through some sort of speech about how Mandy told the cops that a retarded redneck killed her friends and a sheriff in these same woods. Just then, Luther attacks! And then, just to fill some more space, we get to see the entire movie in super-fast rewind mode, with stops at the best lines so as to point out that this was actually a comedy and not just a really shitty horror movie. Yeah, I don't care.

I have to give David C. Hayes come credit. He put together a creative script and plays the role of Luther to the hilt. However, I guess it's impossible for him to jump around like a three hundred pound ignoramus and direct at the same time. However, I have no idea what Grant Woodhill's excuse is. I guess he's just an idiot. "Back Woods" honestly shows a lot of promise. There are some pretty funny moments in here. It's just a shame that they're either not executed quite right by the actors or just so flawed technically that it doesn't make any difference. This movie ends up being just a failed experiment. Also, a three hundred pound retarded redneck transvestite serial killer? What the hell is wrong with this planet? Argh, my brain!