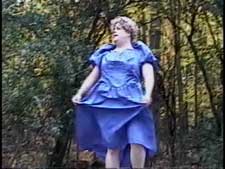 I'm being punshed for something, I can tell.Speaking of his hermaphroditic mother, she's in a disgustingly happy mood. I don't mean "disgustingly happy" in the sense of being so overwhelmingly happy that it offends the senses, but rather that she's a hideous creature and any display of emotion makes her he-bitch she-jowls jiggle like a couple of jellyfish in a blender. In the totally unknown amount of time since she irreparably damaged her only child's brain, she apparently got over that fact and became quite content in her new role of constantly attending to her giddy, bib-wearing retard of a son and his menacing forest of back hair. She slips into her favorite blue dress and tells Luther that she's going into town, instructing him to "play with his little monkey" until she gets back. She then skips away through the woods. Let me tell you, I've seen some pretty disturbing things in my time, such as a three hundred pound manbaby being born through a bloody ass crack, but watching Luanne the Transsexual Beluga skip through the woods while the handheld camera rattles around like a Shaker in an earthquake is right near the top of the list. Fortunately, it comes to an abrupt end when she gets creamed by the teens in the van. She gets hit so hard, it knocks her wig clean off, revealing that the stubble on her shaved head is, coincidentally enough, precisely the same length as the shadow on her cheeks. The teens pull over and cluster around the body just in time to hear Luanne curse them with her final words. They are also there in time to hear the film skip randomly and Luanne curse them with her final words again. Nice catch, Grant Woodhill. The teens, being teens, decide against calling the cops and instead just move the body by about a foot and a half. And for good measure, they then back over her skull, splitting it like a latex ball that is also under their tires. 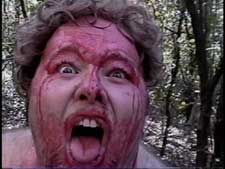 Luther, meanwhile, is still in the woods, playing with his little monkey like a good, albeit horribly disturbing and unsightly, boy. But his retarded revelry (what? He's retarded. Get off my case) is disrupted when a high-pitched, nigh-on unintelligible voice calls to him. Why, it's Mangina, the sexless ghost! He's a lot like Casper, the friendly ghost, only with more psychologically traumatizing nude dancing. It's pretty much impossible to understand anything that Mangina understands, but I'm led to believe that he/she tells Luther that his mother is dead and that he should exact his revenge on the rowdy teens. And so it is that Luther becomes bent on a single purpose - destroying those who slew his beloved mama. Now, it seems to me that he could have just as easily become bent on a single purpose - destroying those who slew his beloved mama - without Mangina. He could have just as easily become bored and decided to get up and follow after his mother. He is a retard after all. They're not exactly known for their whopping attention spans. Now, considering that this is the last time Mangina does anything whatsoever, am I really going out on a limb when I say that he/she/it/narf could just be cut from the movie entirely? Although I can't really say I blame Grant Woodhill and David C. Hayes for wanting to pad out their movie with hermaphrodites, considering the final cut of the film still only runs just over an hour.

Luther storms through the forest to the roadside where he finds the body and wig of his dear, departed he-mommy. He tries to wake her by calling her name. He tries to wake her by scratching her gonads (I swear to God), but to no avail. Something about her no longer having a head prevents her from waking. So Luther does what any son would do in his situation - he puts on his mother's bloody wig and blue dress which is several dozen sizes too small for him and shows off his impressive collection of shoulder fur (impressive considering his mother has to shop at the local Enormous & Lumpy just to find fashions that fit), and goes off in search of a victim. 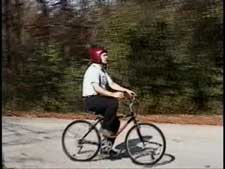 Back at the utterly worthless gas station, where Crazy Al and Sheriff Taylor are amusing themselves by pressing their fingers together and trying to see if it looks like a vagina, the movie's real star makes his first appearance. I'm talking, of course, about Cannonball Boy. His character can be summed up thusly: he rides a bike and wears a bike helmet. That's pretty much it. So you can see why he has enough star power to propel "Back Woods" to the top of the proverbial charts, which are strikingly similar to the actual charts. That's why his entrance is met with applause and his every line is followed by a really shitty laugh track. This is just one of those moment where "Back Woods" has an honest to God moment of brilliant absurdity. Oh if only, if only they weren't so entrenched in stupidity. Ah well. Cannonball Boy entreats Crazy Al for some air for his tires, but it turns out that the gas station has neither gas nor air. In fact, I'm beginning to wonder if the sign that says "gas" is really an advertisement at all, or if it's actually a statement about life such as it is. It's an argument that requires some deep thought, but luckily I don't care, so we can dodge that bullet. Anyway, Cannonball Boy rides off and gets decapitated by a rope that Luther stretches across the road. So, you know, take that. 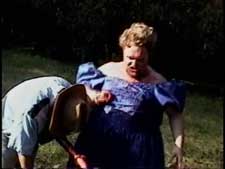 His dying words: "I stopped trying to make my hands look like a vagina for this?"

Sheriff Taylor puts the vagina game and drinking on temporary hiatus and gets up to go check on those crazy teens he saw earlier. As he tromps off toward the nearest logical campsite, or really just in a randomly chosen direction, Luther impales him on a tree branch. And then, just for good measure and by way of proving that he's an evil retard, he does an "I just shoved a tree branch through an officer of the law" dance. Luther then heads to the gas station, where he proceeds to beat Crazy Al to death with a shovel. Now, I know what you're thinking - not Crazy Al! But sadly, even the craziest of Als must come to an end sometime. If it's any consolation, the beating scene features some fantastic footage of Luther smacking a camouflage-clad body with the shovel, causing the body to lurch and revealing that it has no hands or feet. Cinema Verite this is not. Okay, so now Luther has officially killed every single character movie who had nothing to do with his mother's death. I can't for the life of me figure out why he'd kill the sheriff or Crazy Al. All they did was try to tell the teens to leave Luther and his mother alone. And he had to set up a trap for Cannonball Boy, and that's can't be easy for a retard. Seems like an awful lot of work to kill some random guy on a bike. Maybe he should try to kill Mangina next. It's not like anybody's going to miss him/her/it/them/us.

As for the actual killers, they have set up camp and made themselves comfortable in the woods. There is only one tent for the five of them, and it's not exactly huge, so that's a bit suspicious, but then I suppose that since they're rowdy teens, they're planning on spending their nights on top of one another in a crazy sex orgy, so they won't need as much space. Leroy and Lisa go off together to have themselves a slice of sex, and Sammy wanders off to commune with the bear spirit within him and shit in the woods. That leaves John and Mandy together at the campsite. So let's see... two couples and a guy wandering around on his own in the woods. Oh yeah, they're all safe from harm. Well, except for Sammy. Luther catches up with him just as he's squatting to relieve himself and jams tent spikes in his eyes. He doesn't kill him, just jams tent spikes in his eyes. So alright then.