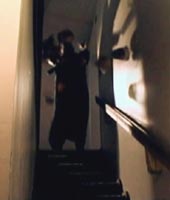 Yes, that is a grown man throwing baskets down some stairs. My life has hit a new low.As much as she isn't phased by the dead lawyer, Ally does freak out when she finds the body of Margaret Stravinsky, Dr. Stravinsky's wife. Only, she's not as dead as he liked to tell people. She's in a coma. It turns out the good doctor has been using his wife's comatose body as a vat to brew up the useless drug he named after her. I'll admit, that's a little fucked up. Ally runs for it, dashing down a flight of stairs. That's right, even the basement has a basement. Dr. Stravinsky sends his good friend Basketweave after her. The killer is all too happy to finish off the niece he failed to kill all those years ago. "Don't you know it's basket time?" he asks of no one in particular as he flings an armful of baskets down the staircase. That, in case you were wondering, may actually be the single least menacing villain line ever. Seriously, he inquires into the general awareness about the fact that it is basket time, then throws a bunch of baskets down some stairs. I've seen movies in which people are literally killed with butter, and this is still dumber.

Ally somehow dodges the rain of lightweight wicker and hides in a convenient metal cabinet, fashioning a crude lock out of a bend coathanger. As Basketweave approaches, Ally has a flashback to her childhood. In this vision, she sees herself as a young ten/twelve year old girl, gaily singing:

(to the tune of "O Christmas Tree")

I& I have no words for how much I hate my life right now. Might as well keep going. Back in the present, Basketweave tries to break into the cabinet, but is unsuccessful. Never mind that we've seen this guy rip a woman's head off and drive wicker through a man's chest, Ally's bent coathanger is just too much for him. While he struggles with the cabinet doors, the cop appears in the basement just in the nick of time. Unfortunately, he is stopped by one of the nurses, who shows up behind him to inject him with a massive dose of Margaret. This slows the cop down, but does not cause him to hallucinate like it does everyone else. Presumably because he's fat.

Fearing the fat arm of the law, Basketweave makes his escape. As he runs away, however, some fancy camerawork reveals that Basketweave and Dr. Stravinsky are the same person! Yep, it's the classic "the killer and the healer are the same person" twist ending. So, the uncle who killed Ally's parents is also a German physician and chief of medicine at Ravenwood. You'd think she would have cracked that one already. You might also think that this twist adds nothing whatsoever to the movie and makes no sense, and this time, you'd be right. 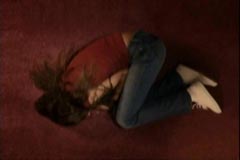 Well, Ally's been home two minutes and she's already in the fetal position. I'd say she's off to a great start, wouldn't you?Basketweave/Stravinsky escapes with his loyal nurse. The cop, still unaffected by his injection of Margaret, takes Ally away from this godawful hospital and brings her to her old house, which is now rightly hers. Sure, she hasn't been there since the night her parents were brutally killed, and sure, Basketweave/Stravinsky is still at large and presumably still wants to kill her, and sure, there's an ominous thunderstorm brewing, but Ally is sure she'll be okay alone in the house. She's not there long, however, before a flash of lightning illuminates a big, bald figure standing just outside the window. It's Basketweave, come to finish the job! Fearing for her life, Ally does the only sensible thing - she opens the front door so he can let himself in. Seriously. 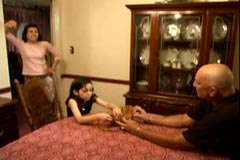 Oh, what the hell!The camera switches to Ally's perspective as she runs upstairs to the bathroom where she hid as a child, opens the laundry basket, and finds& the childhood version of herself? The camera pulls out and reveals that it's not Ally's perspective that we've been following, but Basketweave's. Only, he's not a crazed killer or a German doctor. He's little Ally's father, and he's worried about her. And Jaqui is Ally's mother. Do you see what's going on yet? That's right, it's the "it was all a dream" twist ending! That's two twist endings for the price of one! Absolutely none of this happened! Little Ally just dreamed it all while hiding from the scary thunderstorm; the murder of two people who weren't actually her parents at the hands of her deranged uncle who is actually her father, ten years of medical experimentation from a doctor who was also her deranged uncle who is actually her father, five years of abuse and humiliation by a mean nurse who is actually her mother - it was all just a figment of her imagination. In fact, this whole movie was just Christopher Forbes's way of saying "fuck you" to the viewer. Join me now in saying a hearty "fuck you" right back.

There are some good things that can be said about this movie. While some of the casting is a little suspect (the randomly German Dr. Stravinsky has such a thick accent as to be nearly unintelligible with the lousy sound quality; the cop is fatter than any cop has a right to be), some of the actors do a fine job. Basketweave is a decent, if ill-conceived psycho, and while Jaqui is annoying as hell, most of that is intentional. The camerawork is fairly decent for a tiny-budget production. Christopher Forbes, who directed and co-wrote the screenplay, also took on the task of composing the score. While the movie's terrible sound quality prevented me from hearing much of the music, he did write not one, but two songs incorporating the word "basketweave," and that has to count for something. Sadly, the good points end there. I mean, what the hell? This movie is all over the place. It's a slasher flick about a basket-obsessed killer (not the greatest premise, but I'm willing to run with it). Then there's forty-five minutes about an asshole nurse trying to steal millions of dollars. Then the whole thing just collapses under the weight of its own twists with the pointless revelation that Basketweave and Stravinsky are the same person, followed by the frankly insulting revelation that the whole movie was just some kid's bad dream. The last fifteen minutes of the movie are so frighteningly stupid that the scene where a guy gets stabbed with wicker actually seems cool by comparison. As the basket motif was driven into the ground and the twists started piling up, I could actually feel myself advance from boredom to frustration to a seething rage that I usually reserve for movies that are insultingly idiotic from the first frame. Basketweave is an emotional rollercoaster, but the kind where a kid loses his arms and the whole park has to shut down.