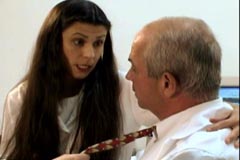 Is it just me, or does Jaqui look like someone left Alanis Morisette out in the sun?Now, you might expect that a movie called Basketweave that features a serial killer named Basketweave and opens with a scene of Basketweave killing people might place a fair amount of focus on, you know, Basketweave. At the very least, you might think that the movie would be about Ally, the victim who lost her family, her childhood, and a fair chunk of her sanity to her deranged uncle Basketweave's murderous actions. You would be wrong. Honestly, are you new to this or something? I would have thought you would have learned not to have expectations by now. This movie is actually about Jaqui. A letter arrives at Ravenwood addressed to Ally, so of course Jaqui opens it. It's from a lawyer saying that Ally has inherited over three million dollars from the estate of her dead parents. One might wonder why she is inheriting this money now, and not ten years ago when her parents made overzealous donations to the blood drive being held on their carpet. One can just shut the hell up.

Naturally, Jaqui decides that if anyone deserves that three million dollars, it's her. After all, she works herself half to death day after day. You think those three patients are going to torture themselves? And why should Ally get the money? I mean, who died and made her Richie Rich? Oh, right, her parents. Well, anyway, Jaqui concocts a three part plan.

Part One: Pose as the hospital's financial administrator and contact the lawyer on Ally's behalf.

Part Two: Convince the lawyer that Ally is mentally unfit to control the money, so he'll sign it all over to Ravenwood to pay for her care.

Part Three: Get control of the Ravenwood finances so she can spend the money on shoes.

The first two parts are easy enough. The lawyer has no reason to believe Jaqui is lying, and when he comes to see Ally for himself, Jaqui pumps her full of that wonder-drug Margaret until she's a drooling vegetable, or at least more of a drooling vegetable than usual. Seeing her in such a state, the lawyer is more than happy to give Ravenwood the three million dollars to fund Ally's care, which raises the question of just who the hell has been paying for Ally's care for the last ten years. My guess is Basketweave, since he's evidently had nothing better to do all this time. The third part of the plan is a little trickier. To pull that off, Jaqui has to wrest control of the Ravenwood finances away from Dr. Glass, the man who currently controls them. Luckily, Dr. Glass is a horny old pervert, and Jaqui is not above using sex to get what she wants. She just struts into his office, plops down in his lap, and tells him that if he gives her control of the finances, she'll continue to wear lipstick. That's right, the height of sexual deviance in this movie is a woman wearing makeup that she had been wearing all along. That's some scintillating goddamn cinema, that's what that is. 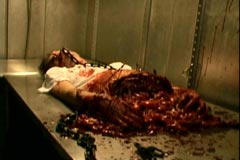 I don't think his HMO is going to cover this one.Since Jaqui is busy conning Ally and the hospital out of millions, Dr. Stravinsky is forced to actually interact with the patients. Not wanting to leave anything to chance, he has them strapped down before dealing with them. Then he injects Stereotypically Agitated Mental Patient and Stereotypically Passive Mental Patient with massive doses of Margaret. At last, we get to see the true effects of his miracle drug. Evidently, it causes them to have horrific hallucinations. After ten years of human testing, Dr. Stravinsky has yet to figure out that his drug not only doesn't help his patients, it actually makes them worse. Nothing says "honoring the memory of your dead wife" like injecting helpless head cases with needles full of terror. When Stravinsky goes back to check on one of the patients, he finds the man has apparently been ripped in half while strapped down. The doctor's only response is, "He's back," and this incredibly gory scene is never mentioned again. I have to say, I'm having second thoughts about the safety of this hospital.

The lawyer shows up at Ravenwood a few days later in order to go over some final paperwork with Stravinsky. He sees Jaqui in her nurse's uniform and calls her out on the fact that she's not really the hospital's financial administrator, which she shamefully admits. She may have tried to swindle one of her own patients out of three millions bucks, but the lawyer isn't the type to hold that against somebody. He doesn't even tell her it was wrong. He just asks her to take him to Stravinsky. Jaqui says he's in the lowest basement working on an experiment. She leads him to the elevator, then blatantly fakes a page and walks away. The lawyer goes down to the basement, where he sees shelf after shelf holding hundreds of wicker baskets, which strikes him as a little odd. He then comes upon a big, bald man working with wicker. You guessed it, it's our friend Basketweave! Hooray! The lawyer pesters good ol' B.W. with some basket-related questions. It seems the years have decreased Basketweave's desire to talk shop, however, and he only gives a few perfunctory answers before killing the lawyer by stabbing him with sharpened wicker. If it seems like I'm not giving a lot of attention to the ridiculous interactions in this movie, from the stilted, pathetic dialogue to the moronic action, it's because the real stupidity is yet to come. 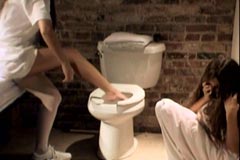 Well, this is certainly happening.Irritated at having been called out by the lawyer, Jaqui goes into Ally's room, takes off her stockings, sticks her foot in the toilet, and makes Ally lick the toilet water off her. In the middle of this degredation, Dr. Stravinsky walks in to find his best nurse partially disrobed, with her foot in the mouth of a barely-conscious patient. Naturally, he does not care. His only concern is that Jaqui find the lawyer before his office calls the police. Of course, the law firm has already called the police. When the cops hear that a lawyer has gone missing at the psychiatric hospital, their first response is to do nothing. Then, a grossly fat cop happens to recall that ten years ago, a girl named Ally was committed there after her parents were killed. He just so happened to have worked on that case. So, since a girl who was related to a case he barely remembers from a decade ago was committed there, the cop decides to check into the missing person report at Ravenwood. Otherwise, he would have just let it go. You know, I've watched a lot of awful movies, but I think the characters in Basketweave might just be the most useless bunch I've ever seen. I mean, you've got one doctor who has spent ten years testing a medicine that makes his patients worse, another doctor who thinks that lipstick is the height of depravity, two nurses who do nothing, one nurse who sticks her feet in toilets for fun, cops who only investigate crimes if they hold some sort of tangential interest, and a serial killer who murders people with sharpened wicker. Silence of the Lambs this isn't.

Jaqui returns to Ally's room to give her a giant injection of Margaret. Suddenly, Ally wakes up from ten years of essentially being a giant paperweight and punches Jaqui, causing her to fall on her own syringe. While Jaqui suffers Margaret-induced hallucinations, Ally makes a break for it, scrambling down the laundry chute into the basement, which, of course, is where Basketweave resides. It's time for her to unintentionally come face to face with her parents' killer, whom she has expressed absolutely no interest in finding and/or bringing to justice. Fortunately, while they are both down in the basement, setting the scene for an intricate cat-and-mouse scene, neither of them seems to be aware of the other. Ally does, however, find the dead lawyer, who has been propped up with a basket on his head. Ally has been staring at the same four walls for the past ten years, and yet even she doesn't think there's anything remotely frightening about a dead lawyer with a basket on his head. It's kind of sad, really.