Turning a desert into, well - a desert

Hydrogen: I see he brought the mystical knowledge of the 80s power rock movie ending back with him from the mystical land of El Eh.

Trillaphon: Is this a good time to point out that the screenplay for this movie was written by 5 different people?

Hydrogen: That would explain why nobody seems to have ever read the finished script all the way through. The whole plot is so convoluted that even the main villain needs to use a wisecracking witch as his personal GPS to navigate his way through it.

Trillaphon: And the Beastmaster is totally cool with riding around in a convertible one minute, and then his pre-medieval barbarian brain is destroyed by a mirror or a TV in the next scene.

Trillaphon: But he has absolutely no problems with the multi-dimensional portal that literally transports real live people across the boundaries of space-time.

Hydrogen: Nope. He's used to that. But reflective surfaces? Fuck that, man. 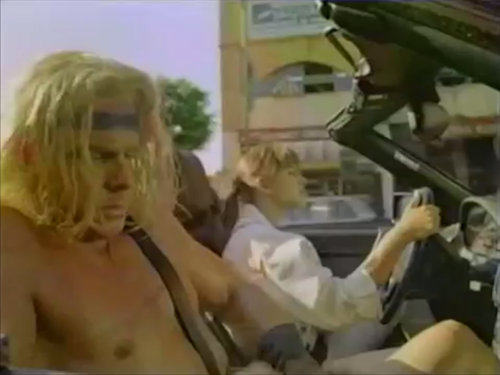 Trillaphon: Also, he's the Beastmaster but all of his animals so useless they might as well not exist, or they exist solely for the purpose of being props in a dick joke. I was really hoping he'd strap the ferrets to his feet and ride them to freedom like rollerskates instead.

Hydrogen: I was waiting for him to break out the ferretchuks as a weapon of last resort, personally.

Hydrogen: There's also the expected array of gaping plot holes, although in Beastmaster 2 they're so bad that even the official IMDB plot summary is making fun of how stupid it gets:

Trillaphon: No, see, Arklon doesn't want to actually blow up the world, he just wants the bomb so he can rule a stone-age desert wasteland through mutually assured destruction. Of course, he's already the ruler, and there's no one else to make any destroying mutual, and he has to be physically holding the nuclear bomb in his hands to even fucking use it, so maybe it's not the best plan.

Trillaphon: Let's also not forget that at one point, they literally just say "hey, let's see what's on TV", and happen to switch on the local news right at the second they're reporting live from the local top-secret nuclear military base, which is also the same second that the villain walks into the background and mugs for the news camera.

Hydrogen: To hell with that, I want to forget that and everything else about this stupid movie, or at least repress the memories until Beastmaster 3 lands on our desk.

Trillaphon: I plan on going criminally insane long before that happens.