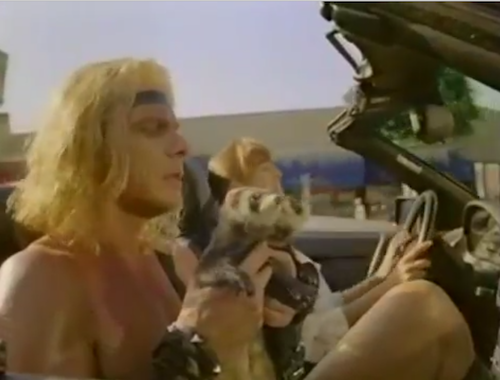 Hydrogen: For all of the hype about how he's the Master of Beasts, his animal buddies sure don't do much of anything. Sure, his eagle claws half of Arklon's face off, but his tiger puts up a lower killcount than Siegfried and Roy's.

Trillaphon: The tiger isn't entirely useless, it does manage to steal Arklon's ancient barbarian laser gun from him to set up the climactic showdown.

Hydrogen: The only reason that happened it because Arklon picked the god damn ZOO to make his last stand, not even considering the possibility of getting trampled by the goddamn elephant he's staring at. The elephant that he sets free with his stupid laser tantrum.

Hydrogen: If only he had used his psychic mind powers (which he also has for some reason) to foresee the earth-shattering power of the dreaded BATTLE FERRET:

Trillaphon: I was going to make a joke about his fleshy tube-shaped companions there, but then he whipped them out right when he saw a sex club sign and said "Yesss, my friends", so I'm just going to start guzzling this bottle of whiskey and curl up in the fetal position on my kitchen floor instead.

Hydrogen: Who doesn't enjoy having a nice hairy weasel in each hand? Best weekend she's had in like, months.

Hydrogen: "I hope you enjoy the juice of mine be-greased love mammal, milady, for he has perspired most heartily."

Trillaphon: Hopefully the blindness is permanent this time.