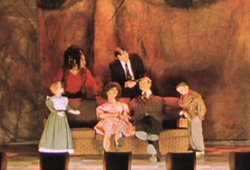 My one wish with this scene is that the saw would slip and he'd puncture an artery in his stomach.The thing is, even if the movie didn’t go out of its way to tell us they lived in a sewer like a group of metrosexual Ninja Turtles, we could have guessed pretty easily. Not because anything in the film remotely resembles a sewer, mind you. As you may recall, in my last review I told you all that the movie “Zombiez” came out of Satan’s gaping, bug-infested asshole. Well, kind reader, “Existo” was actually filmed in Satan’s asshole, and the Satan’s Asshole Dry Goods Merchant and Apothecary was fresh out of flashlights on the days the makers had a permit.

This problem, along with some truly horrible music (it has more poorly-played saxophone and accordion music than a bloody fistfight between Kenny G. and the nation of France), comes to light in the next scene, the film’s first musical number. I have to admit that Coke Sams strikes a killer satirical blow to The Man in this act, which features Existo bouncing around on a rubber ball and playing Russian roulette while shouting the phrase “fuckin’ A” for about five minutes straight. This is, of course, a perfect way to lampoon all those big wigs up there in Washington, who do nothing with our tax dollars but hop around on Pogo Balls and squirt each other with squirt guns all day. One time in fifth grade we went to the Capitol on a field trip and it was like watching the movie “Big” for hours on end, that’s how many rubber balls those motherfuckers were bouncing on. Fuckin’ A, man.

In the next scene we are introduced to the “culture wars,” a (presumably) important plot point that we never once see because Sams spent the entire production business finding the world’s worst studio musicians to shit out his musical vision. Apparently Existo spends the rest of his time with his group, exposing an unsuspecting public to unsanctioned works of art. They plan to use the art to free the minds of their poor brainwashed countrymen. After the “Fuckin’ A” song we are transported to the dressing room of the club, where one of the troupe’s operatives has been shot for putting on an anti-capitalist play in front of the NYSE. In order to save his comrade Existo dons a hat that looks like a gigantic breast and chains himself to a wall, and then we’re back to another musical number.

If the music in “Existo” is terrible the singing is damn near excruciating. For one thing, Arntson finds it necessary to deliver every single fucking line in an ungodly faux-Ace Ventura drawl. Because he sounds like a prepubescent boy having his nuts stapled to a hot iron, the lyrics he delivers, a steaming, hissing pile of three-syllable words thrown together like they came from the world’s the world’s most pretentious bowl of alphabet soup, suck that much worse. 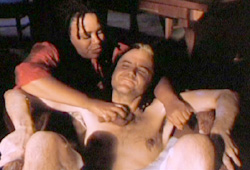 That isn't a bunch of hair on his nipple. It's a bruise. He had to let Satan give him a titty-twister for the $10.72 they needed to make this movie

Take, for instance, this line from the song “And I Cry,” which I promise is taken verbatim:

Undoubtedly someone somewhere found that line to be the most intelligent, enlightening thing he has ever heard. I’m sure that, as soon as he heard it, he dropped his Super Troopers-themed bong, shut off his well-worn copy of “The Crow,” and raised his arms to the sky. I’m sure he called his mother from a payphone and begged her for eight dollars so he could go get his dreadlocks cut off. And I’m sure that, when he got those eight bucks, he took them, went to the bookstore, and bought a copy of “Steal This Book” so he could “accidentally” drop it out of his backpack in front of high school girls at parties his buddy Dave threw.

This, ladies and gentlemen, is the archetype of a person who would find “Existo” enlightening. And if there is a better posterboy for the brutal execution of all community college students, I do not know where he is (he could be over at Sam Goody deciding between an “Enter the Matrix” poster and a t-shirt with a picture of an anthropomorphic marijuana leaf smoking a bowl – if you’re looking for him just shout a quote from “Friday” and walk towards the hysterical laughter).

Even if the music was great and the songwriting was superb, I would still shy away from calling “Existo” a musical. Why? Because instead of, you know, placing the songs throughout the movie to advance the story and/or set a mood, Sams decided to put almost every song he had in a big half-hour block in the movie. In a lot of ways it’s like having organ-shitting diarrhea bookended by bouts of projectile vomiting, but the whole time some dude with pink hair and cat’s eye glasses is shouting lines from a college newspaper’s opinion section.

And on top of that, roughly half of the songs really aren’t music so much as Existo staggering around the stage and repeating himself like a retard. Take, for insance, the song “Yeah Right,” which comes about halfway through the block of “music”:

This might sound okay until you realize these are the entire lyrics of the song. To break up the monotony Existo occasionally puffs out his stomach and runs around the stage like a retard, but obviously such antipolitical genius can’t be held down for that long! You can look for my spinoff album, “Ugh Ohh Oh, No: Fuck George Bush” in the dumpster behind Wal-Mart very soon!

Up next is “Love Thing.” To me, the “Love Thing” scene was something like a religious experience, except instead of feeling some sort of divine rapture I got really sick to my stomach and also incredibly angry. Watching the scene is like being kicked in the balls, neck, and gut all at once. It’s like having every pressure point on your body squeezed by remarkably strong lobsters. It’s like eating a piece of your favorite candy and then realizing it’s really a hand grenade full of nails after you’ve already pulled the pin and put it in your mouth.

In short, “Love Thing” is this.

Although I didn’t include it in the gif above because I didn’t want to bring the servers down, he also runs off to the surface with the woman, who is actually an actress sent to the sewers by Glasscock to capture Existo. But most of all, I learned that anyone with an airbrush and two dollar’s worth of Styrofoam can easily make himself a magical flying penis pogo stick. They don’t teach you that shit in Boy Scouts – they don’t even teach you insertion until you’re an Eagle!

The horror does not end at the “Love Thing” scene, however. In fact, only at this point in the movie (nearly two-thirds of the way though) does some semblance of a plot begin to show up, mostly in a stream of bizarre images and sounds not unlike a half-hour-long version of the “Closer” video, only a whole lot more irritating. After Existo runs off with the actress the remaining members of the troupe eat some mescaline and devise a plan to kill him.

Meanwhile, in the normal world, Existo, in his lovestruck state, tells Roupen he will work for the government in suppressing the artists. He and the actress make smoochy-faces at one another and the three all eat and have a merry old time.

And then the weirdest shit in the world happens.

You might have seen me mention Jim Varney’s name a few times in this review. Up until this point in the film he has had precisely one line of dialogue, possibly because he spent much of the movie backstage preening his beautiful mustache. Whatever the case his twenty second scene in “Existo” is without a doubt the strangest, most terrible, degrading thing I’ve ever seen in my life.

Let me explain something: As a child, I was a retard. As such, I loved the “Ernest” movies with all my little heart, and made it a point to go to every one they released at the theater by my house. I have fond, nostalgia-laced memories of third grade, when I’d run in the classroom and scream “EWWWWWW” at the top of my lungs just like Ernest did in “Ernest Scared Stupid.” Although my obsession with Ernest gave way to The Terminator and then eventually breasts and vaginas, I held a fond place in my heart for Jim Varney and got a little misty eyed when he passed away a few years ago.