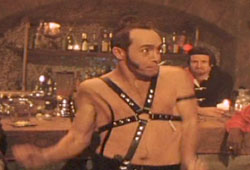 While I realize a guy in bondage clothes swinging his hand around is strange enough, I want you to look at the guy back and to his right. Where is his nose?So think about how I felt when I saw my childhood idol stripped to his underwear covered in what appears to be oatmeal. Imagine my surprise when I saw Jim Varney, a the precursor to all those Jeff Foxworthies and Larry the Cable Guys, screaming at the top of his lungs about capitalism and “getting a whiff of ribald pussy.” Envision, for a second, the pain I felt when, in the middle of his diatribe, Varney was shot in the eye and started gushing blood – Ernest’s blood! – all over the restaurant. I would say my childhood was ruined if I hadn’t seen that video of He-Man violating the Teenage Mutant Ninja Turtles one by one with his Greyskull Sword while that weird-looking wizard dude licked his asshole. On a side note: ECTOCOOLER.

Whatever the case, in the next scene Existo and the actress are cuddled up in Roupin’s ranch home. Existo forces the actress to smoke some pot, which turns her into a raving psychopath. Existo leaves the bedroom to follow her and the troupe members sneak in, getting ready to rig the bed with explosives, when the couple returns. The three troupe members hide under the bed and wait for the two to leave again so they can blow the house up and kill Existo for the cause.

One of my biggest problems with “Existo” is that, for all the jerking off it does over how original and great it is, not a lot of new stuff (and even less funny stuff) happens. Really the whole movie reeks of John Waters’s vomit, and this is coming from a guy who would rather stick a white-hot coat hanger up his peehole than ever watch another John Waters movie. Really it’s like Waters got a cancerous mole removed and Sams sucked on it long enough to write down “ERNEST NAKED COVERED IN OATMEAL PENIS POGO” on a cocktail napkin.

“Spin the Bishop” is the kind of stuff I’m talking about. Although it has no play on the plot and is maybe the most excruciatingly unfunny thing the last time “American Dad” was on, Sams found it necessary to fit in a scene where someone yells “spin the bishop” and Existo, well, spins his bishop. As much as I like to see grown men gyrating their hips and alluding to the fact that they draw great pleasure from swinging their cocks around like a windmill, I think that’s better saved for another movie. A much longer, much more personal movie. The movie Sams will watch forever when he makes his inevitable, permanent return to Satan’s asshole.

One of the troupe members explains that Existo becomes suicidal after playing Spin the Bishop, and the only thing that can stop him from killing himself is a Little Debbie snack cake. Again, I wish I could say I was making this shit up. Actually, scratch that – if I made something like that up I could very well be Coke Sams, and then my only recourse would be to go to church a bunch so god would reincarnate me as something better, like a nun transport van with faulty brakes or one of those flowers that smells like rotting flesh.

Two of the troupe members tie the actress to the bed and strap her down with explosives. The third takes off after Existo, who is hell-bent on taking his own life. After a few failed attempts he manages to nearly drown himself in a bowl of soup, but going with the whole “not a single goddamn redeeming factor in the movie” thing, Sams decided to bring him back.

The three troupe members discover Existo face-down in a bowl of alphabet soup and start to cry, curse, and smoke cigarettes in rhythm. This somehow brings Existo back to life and sets him into a grand mal seizure. The troupe members force him in a van and take him to a special government-sponsored concert he was set to perform in.

For all the shit I talk about “Existo” I have to say it never fails to disappoint. I was pretty sure that, this late in the movie, there would not be another musical number. This set me up for a feeling of disappointment not unlike being a kid opening a Christmas present that you think is a Game Boy but discovering your pet cat dead in the box. Then, after some crying, you go to bury the cat and find that its anus is deformed and your dad’s wedding ring is hanging halfway out of a pile of guts and cat feces.

So they push the seizuring Existo on stage at the concert and blow the ranch house up with the actress tied to the bed. Existo spews out a few more amazing lines about some dumb shit nobody gives a fuck about as his minions spike the attendees’ drinks. Soon everyone but Glasscock is dancing and having a good time, so he jumps on stage himself and tries to quiet things down.

Sams might be an untalented dickweed but at least he is an unselfish untalented dickweed. The humanitarian that he is he made absolutely sure that no more than two original ideas made it into “Existo,” thus giving a bunch of better, older, more entertaining ideas some room to shine in his film that maybe twenty people have seen. After going after Bradbury with his “government banning art” idea and Waters with his “everything else in the movie” stuff, he decided to drag Orwell’s name through the mud for a bit. You see, when Glasscock jumps on the stage he slowly starts turning into a pig and squealing in time with the music. Rumor has it Orwell planned to sue for similarities to “Animal Farm” until his lawyer advised that he was a pretentious dead fag. Existo reunites with his troupe and they drive off into the suburbs in a station wagon that was never once shown in the movie before this, and all is well. Roll credits.

But, looking past the fact that “Existo” is pretty much the exact reason people react violently when hippies come to their door asking for them to sign a petition for renewable energy or cheap Phish tickets or some lame bullshit, I think the biggest tragedy here is Jim Varney. Although he went on to film other movies like “Treehouse Hostage” and “Ernest Gets Addicted to Lottery Scratch-Offs” later in his career, I don’t think I’ll be able to remember him as anything but a nude man caked in oatmeal, screaming about capitalism. I know a lot of you feel the same way now, and I have constructed this animated gif to express my sorrow:

Sleep well, Mr. Varney. May you find happiness in a peaceful world where that cocksucker Vern doesn’t bother you all the goddamn time, my friend.