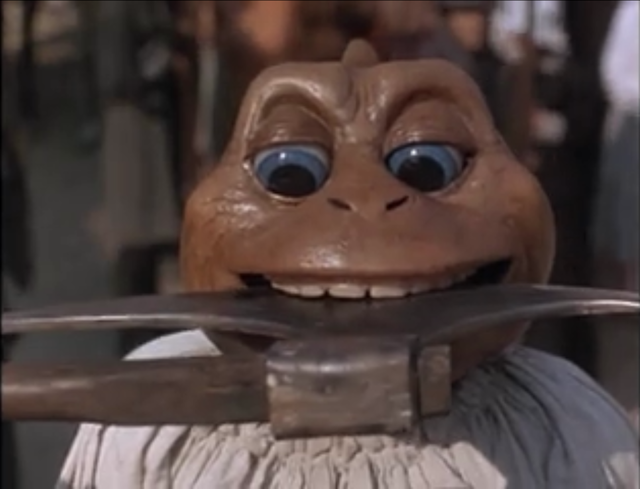 Our whimsical assassin/villain/poisoned towel boy for the day is the black knight El El, or as he is known in Spain, "The The". Early focus groups of mentally-challenged feral children must have kept reading him as too morally ambiguous, because they decided to make him full-on cartoonishly evil, complete with luxurious all-leather bodysuit and poor man's Alan Rickman haircut.*

So, let's see, what might all those decades of secretly hate-fueled scheming and plotting add up to? Now that he's in charge, does El El have some kind of diabolical master plan to conquer the world/blow up the sun/become a living god, maybe? Or something involving an invincible army of unholy minions? Nah, too easy for Lord Leatherdaddy - his first act as de facto Scumlord of Stinktown or whatever is to have all of the dogs exiled from the city by royal decree. Oh, did we forget to mention that he likes cats? He really, really likes cats. A lot. He's what you might call a "Crazy Cat Wizard," and he's got a major bug up his assless chaps about the local dog population. At least he prudently set aside a little bit of the Fancy Feast budget to invest in an atomic village-leveling death cannon built by a blatant Chinese stereotype:

Opposing this wanton canine discrimination (and also some light genocide/mass-imprisonments) is plucky adolescent doofus/boy-Prince Davin, who stumbles his way through the movie whining and letting other people (/hideous lizards) do all the hard work for him. You might think that we're exaggerating, but his singular contribution to the plot is literally crying onto a statue, so he's not exactly King Arthur. Not that the forces of good deserve much better, mind you. When they're not hanging out in the local filthy tavern/gastropub (which has to be the only poverty-ravaged peasant swillery ever to have complimentary bread on the tables), the rebel forces mostly like to practice fighting with swords by swinging them around by the sharp, stabby part like the imbeciles they are.

Welcome to a lifetime of never being able to unsee this image.Given all of the gross incompetence going around, the good guys are pretty lucky to have the monster on their side. Galgameth, who is somehow obligated to protect Prince Whiny and his family or else he probably would have torn him in half like a phone book, starts life out as basically the baby from Dinosaurs, except much uglier and butt-naked. Seeing it in action drives one to impossible philosophical questions, like which is stronger: the burning shame of the guy in that suit or the lunatic pride of whoever put all of those complicated animatronics into that hideous face mask?

We're not sure if this movie has a "climax" per se (it was all one long downhill slide to us), but if it does it'd probably have to be the part where the ugly pee-stained towns"people" band together to wake up Galgameth from his literal dirt nap so he can help them walk slowly toward the bad guys some more. Pretty thrilling, huh? We thought so too. Their inspirational slow-chant of "Blackbird! Blackbird! Blackbird!" is kind of like that one scene in Mighty Ducks, at least if you replaced the Mighty Ducks with some Regular Pigeons that Galgzilla chased around for 2 seconds earlier/that the stupid butthole characters keep referring to as blackbirds for no apparent reason, and Emilio Estevez with a Jonathan Taylor Tweenis half-pint prince.

International intrigue aside, Galgameth is yet another insane Romanian "family" movie, and like its predecessor it's guaranteed to leave plenty of irreparable mental scars on your children if you're foolish or cruel enough to expose them to it. So for those of you who think that just putting a rating restriction on your Netflix account is good enough to protect your kids' fragile little brains, consider yourselves warned. Don't come crying to us when they suddenly want to dress up as the Dark Lord of Chafing or a sexually confused Teenage Mutant Ninja Turtle next Halloween, because we told you so.

*By the way, just in case you're thinking of heading to your favorite barber and saying "Give me the Snape Snip!", you should know that there are strict rules (and also that using that combination of words will probably get you punched in the mouth by everyone you meet). You have to ask for it in your best Hans Gruber impersonation, and you have to be certified as a movie villain or at least anti-hero by the SAG.