Mr. President, It May Be Time to Call Upon Saudi Arabia to Use Their Orb 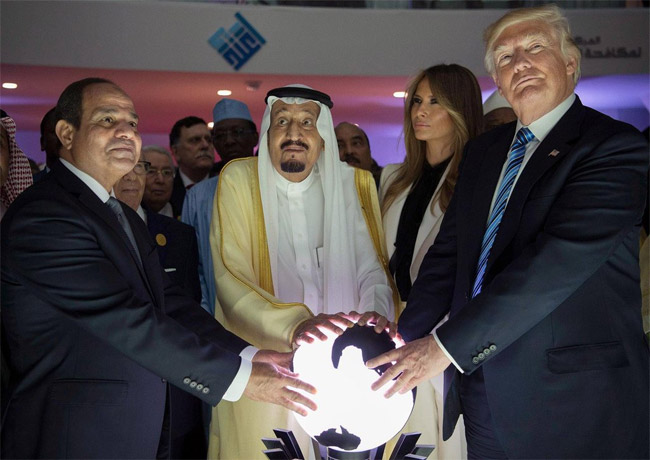 Dear Mr. President,
With leakers betraying you to whistleblowers and the democrats plotting impeachment, it may be time for you to call upon Saudi Arabia to use the power stored within the orb. The sacrifice of Jamal Khashoggi - not to mention thousands of Yemeni civilians - has imbued the orb with untold mana levels. The orb is frosty and trembling with the magical power of the Kingdom of Saudi Arabia. One word from you, Mr. President, and this ancient magic will be unleashed upon your enemies.
Some people might have dismissed the orb as a weird, half-forgotten publicity stunt from the early days of your presidency, but Mohammad Bin Salman has learned his father's magics well and is prepared to use the orb for the good of the world. Or at least the good of Jared. MBS sold Jared a Rembrandt! It was a just a painting for a yacht and it was being used to launder money, but it was still a Rembrandt. They're Rembrandt cousins for life now.
What can the orb do? Its powers are so varied that it might be best to start with what the orb can't do.
1. Win a war with Yemen
Lucky for you, Yemen is completely meaningless to you! Who cares about Yemen? Don't worry about Yemen. Sell more frigates to Saudi Arabia and forget about Yemen.
There are much more useful powers for the orb, such as:
Ancient Curses - Invoke the power of the orb to inflict ancient curses on your enemies. Adam Schiff will hear the maddening whispers of desert winds, Jerry Nadler will turn to salt, and Nancy Pelosi's canopic jars will explode and she will disintegrate.
Summon Shayatin - You call them demons. The orb, which is good and not evil, can summon hideous, flesh-eating demons. These could act as your intermediaries in Ukraine dealings instead of the hideous goblin Rudolph Giuliani.
Conjure Weather - You can conjure hot. That's the only type of weather the orb can conjure. If it's cold, you can make it hot. If it's hot, it will remain hot.
Drift Luxury Cars - Possibly not applicable, since you have never driven a car in your entire life, don't know how to drive, can't ride a bike, can barely walk down or up stairs, and would scream in terror if you tried to ride a skateboard. But the orb would make a normal person able to drift a Mercedes for hours.
Also you should consider getting a pet lion or leopard. The orb wouldn't help with that, but they are very popular and cool now. Very masculine.
Sincerely,
A Concerned Citizen