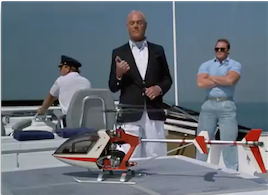 Okay, so the plot of this movie isn't easy to summarize, mostly because it raises more questions than answers. Important questions that nobody seems to want to ask. Questions like "why did my bazooka, which was used 5 minutes earlier to blow up a helicopter in massive fireball, only have enough firepower to barely blow off a snake's head without damaging any of the nearby wicker furniture in somebody's living room?" Or "why did we just have to watch a random scene where some guy we've never met delivers a sales pitch to some other guys we don't know about vitamins and how they turn his pee bright green?" Or most important of all, "who decided to inject a boa constrictor with 60 different kinds of mutant super cancer, and then, knowing that it would die from that in about two days anyway, ship it to a remote Hawaiian island via top secret, extra slutty private charter plane?" The answer to all of these questions provided by HTtH is basically "Sure, right, but look, here's some more titties! Guns and explosions, WHOOOSH! Did we mention titties! WHOOOOOOOOOSH again! Have some racism, on the house!"

Speaking of hideous lumpy fake titties, we haven't properly criticized the nudity in Hard Ticket, which is more contrived and inexplicable than your average Cinemax softcore porn parody of a Hollywood blockbuster. The shirtless guys we can understand, that was more or less a union requirement for any dude who knows martial arts in an '80s action movie. But then there's the scene where the two girls who fly the Hotpants Air Cargo[1] plane around look through the bag of mysterious illicit diamonds and carefully plan their next move against the criminals...while standing topless in a hot tub. If you close your eyes you can practically see director Andy Sidaris adding that last part to the script in red crayon and underlining it a few times right before the shoot.

Come to think of it, the only copy of the script being mostly covered by crayon scribbles would go a long way to explaining the dialogue in Hard Ticket, which we hope to God was entirely ad-libbed. We're pretty sure the Writers' Guild of America has a contractual sub-paragraph involving tar and feathering in reprisal for actually putting lines like "If brains were birdshit, you'd have a clean cage!" and "Vitamin E...helps keep the ol' wazoo hale and hearty!" in a final draft. And if those aren't to your liking, Confucius he say you might enjoy some random baffling racism:

Oh, that wacky The Agency, always delivering classified missions via secret bologna surprise[2]. Or maybe plain white bread with the bill stuffed in it is what the sushi delivery guy gives you when you call up to order and repeatedly refer to them as Bing Bow and "Ducky Shauce" while pulling your eyes back at the sides and shrieking OhhHHhHHHHhHHhHHH into the phone?

We're not going to lie; Hard Ticket to Hawaii is probably the closest we've come to actually having fun watching a movie for this column. Sure, the dialogue is awful, the nudity is so ridiculous every titty you see for the next 8 months will probably just make you burst out laughing, and the action is certifiably insane (if that whole bazooka thing didn't convince you, check out the world's deadliest game of frolf.) But somehow, when all of the actors and crew are obviously having a great time making a movie like this, some of that fun can't help but end up in the final product. And if 12-meter party anacondas exploding out of dry ice toilets doesn't count as a Hard Ticket to Awful Movie Paradise, we don't even wanna know what does.

[1] Hotpants Air Cargo: for when you don't really care if it gets there or not, but you absolutely, positively must have an erection during the entire delivery.