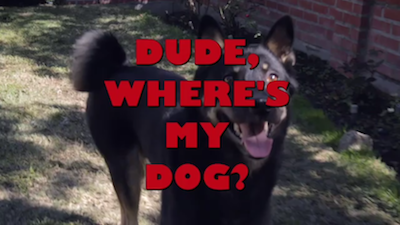 Overview: In a suburban hellscape full of dead-eyed irregular shoe salesmen (not even kidding) and irritating pre-tween spy kids, someone’s family dog eats a cheeseburger covered in top-secret government invisibility serum (again, not kidding) and hilarity ensues. Wait, no, not hilarity, what’s that other feeling...oh, right, it’s that hybrid of overwhelming despair and hatred we like to call “hatespair” - yep, that’s the one.

The Case Against: Most godawful dog-themed family movies at least have a cute dog to look at while you’re trying as hard as you can to ignore the human actors pratfalling all over their own dignity, but the dog is ‘invisible’ for most of this movie so you’ll hardly even get to see it.

Trillaphon: Dude Where’s My Dog? - not to be confused with other zany family animal romps like Ellen Paige’s breakout Close Encounters of the Fifth Head Ghost Cat and the similarly punctuated A Talking Cat!?! - is the thrilling tale of one dog’s long journey back home to his beloved family against insurmountable odds...wait, no, that’s Homeward Bound.

Hydrogen: I thought it was the story of a lovable pooch who gets partnered up with fastidious police detective Tom Hanks to solve crimes and...nope, that’s Turner and Hooch, never mind.

Hydrogen: Unlike an invisible cat, which is astonishingly similar to a regular cat in every way except that it can’t block your computer monitor, it turns out an invisible dog is just an excuse for everyone in your movie to make piss-poor attempts at physical comedy. Speaking of which:

Hydrogen: That clip introduces the Rosencrantz and Guildenstern of this movie: a greasy butter-golem (the kid, not Kevin Farley) who is perpetually torn between his twin loves of ham acting and actual ham, and a man who we’re convinced truly believes deep-down that he’s the human incarnation of Bugs Bunny (spoiler alert: he’s wrong).

Trillaphon: Jesus, that older guy is like if you put Bruce Campbell in a special machine designed to drain human beings of every single good/likeable thing about them and spit out a hollow, soulless husk of trite screwball antics that no human being can understand or relate to in their place.