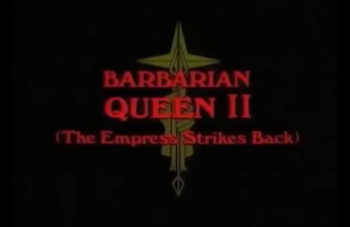 Overview: Filthy Peasant Princess and the Scepter of Occasional Magical Invulnerability didn’t have the same ring to it as Barbarian Queen 2: The Empress Strikes Back, but it would have been much more accurate.

The Case For: If you enjoy random fake catfights between nearly indistinguishable tall blonde women, then you are this movie’s target demographic. You’ll still be deeply disappointed, but at least you’ll know that someone was thinking of you and your perverted tastes.

The Case Against: Even by the rock-bottom standards of a barbarian movie, where the backstory can usually be summarized as “You here, big sword, smash bad man there”, the plot of Barbarian Queen 2 is breathtakingly stupid. 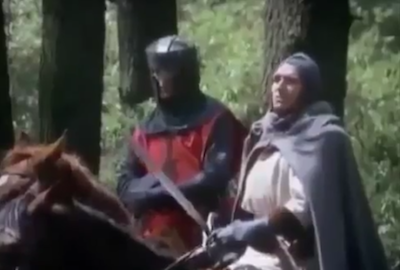 In the wide and embarrassing universe of barbarian movies, female stars are few and far between. We can’t imagine why there would be such a gender imbalance in a movie genre that glorifies filth-encrusted amoral sociopaths who roam the countryside pillaging towns and violently beheading anyone who makes eye contact with them, but...oh, right. So Barbarian Queen 2: The Empress Strikes Back is already something of an oddity for the genre, but we bet the awe-inspiring stupidity of the plot or the most hyper-realistic sword combat since a foam noodle truck overturned next to a preschool for children with terminal ADHD will leave a much more indelible impression on your cerebral cortex.

We’ll admit right up front that our copy of this movie is the heavily-edited no nudity one, which we can tell because there’s lots of slavering boob-related discussion over on IMDB. You could complain that it’s not very fair for us to put BBQ2 in our crosshairs without a pristine original copy, but the amount of savage jump cuts even in scenes where there really shouldn’t be any nudity implies one of two equally damning things about the original cut.

Unlike most barbarians, who have no worldly possessions other than a comically oversized axe and overwhelming personal body odor, Athalia is a princess who is heir to not only an entire kingdom, but also a mystical scepter which grants its owner the power to “never be killed by human hands.” Which makes it just a little confusing for everyone when she gets news that her dear old dad has been killed in battle. Did he get trampled by a horse, maybe? Eaten by a bear? Or was he just an adrenaline junkie who decided to leave his invincibility powers up on the mantle while he went out to fight in medieval trench warfare, clad only with a menacing grimace and a giant battleaxe in each hand? And why aren’t we watching that movie instead, goddamn it?

But wait, it gets even better, because the scepter comes with some extra fine print! See, Athalia wants to use the scepter herself to get rid of some evil usurpers who showed up, but apparently if she uses it and her dad isn’t dead yet, it kills him instantly. Sort of understandable that she wants to see the body, given that little catch. Or maybe she doesn’t feel like she needs the scepter, since after getting captured she just unties herself, punches a couple of guards, and strolls right out the front fucking door of the castle. There’s even a fucking guard standing there watching her leave like some kind of rejected goddamn Monty Python scene.

Speaking of laughable and bizarre cartoons, that brings us to the evil usurpers, the original tag team comedy duo of Ankaris and Hofrax! Hofrax’s hobbies include being terrified of girls, decidedly half-assed torture sessions, and rounding up and hanging totally random civilians just to piss off Athalia. On the other hand, Ankaris stands out mainly for his burning desire for the scepter (even though it apparently only works some of the time) and his desperate need for basic speaking lessons.

Oh, and let's not forget Ankaris's preteen daughter, who somehow manages to be the most depressing character in the whole movie. After endearing herself to the audience by spending most of the movie bullying some wussy knight, she find some other Magical Artifact of Ultimate Power just lying around the castle which transforms her into a washed-up adult film star. Then her father stabs her to death by accident, and we all learn a valuable lesson about watching movies written by throwing a tattered and suspiciously stained collection of Gor novels into a wood chipper.