Overview: Ah, Throne of Fire, or what most Taco Bell regulars refer to simply as "the toilet." This movie by the same name is exactly the kind of heady, cerebral cinema one would normally expect from a movie whose keywords include "bare chested male bondage" and "reference to Satan".

The Case For: Whether you're making a hard-hitting documentary about botched electrocutions or just really enjoyed that one fucked up scene from Green Mile, this movie may finally satiate your lust for video of chairs setting people on fire.

The Case Against: Nothing short of a four-hour extended cut with Peter Jackson narrating over it could help you to understand whatever the hell the backstory of the titular Throne and the people fighting over it is supposed to be - and this is a barbarian movie. 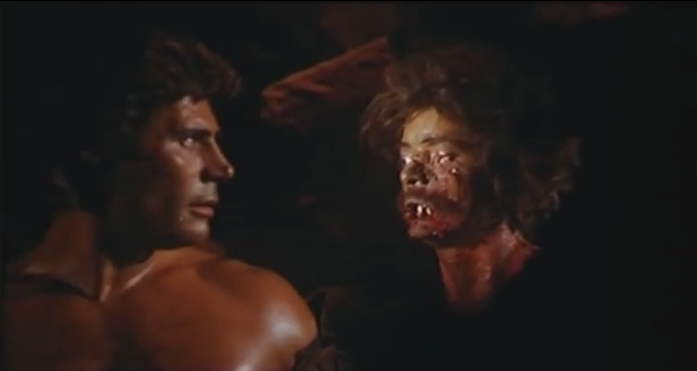 It's about goddamn time we got to enjoy the refreshing cinematic treat of a barbarian movie again. Nothing provides a simpler or less pretentious brand of cheap, stupid entertainment than a solid 90 minutes of oiled up, be-mulleted bodybuilders waving plastic swords around on horseback while somewhere a confused foley artist smacks pork chops together into a shitty microphone. Sadly, every time we get to watch a barbarian movie, there's got to something horribly wrong with it as an example of the genre, and naturally Throne of Fire is no exception.

Oh right, let's take step back here, since we forgot to mention: this movie is Italian - and we're not talking the Sergio Leone or Fellini[1]type of Italian. If you've been with us for a while, you already know just fucking bad the opposite end of that spectrum is going to be.

Even worse than that, Throne of Fire breaks the sacred cardinal rule of all barbarian movies (a thing we totally didn't just make up right now) by trying to have a plot more complicated than "bad man there, me smash now, me Muscules." And the operative word in that last sentence is trying - if there was any limp-wristed attempt at rich pseudo-high fantasy world-building going on behind the scenes, it sure as shit didn't make it within spitting distance of the actual final cut.

Unsurprisingly, most of the action revolves around the titular Seat of Immolation, which treats you to a luxurious one-man full-body flaming dry sauna as soon as you sit in it, unless you follow its very specific and not at all confusing rules. Rules like:

It's not entirely clear whether he can just keep sitting in it after that point, or if he has to wait for the next eclipse to roll around before he can host his next formal banquet and just has to throw some sheets over it until then. It's even less clear why he just has to sit on the Throne of Fire at all, since his army of evil already has complete control of the castle, most of the kingdom, and he has a perfectly good throne already set up in literally the next goddamn room. We guess Satan is a real stickler for quality antique furniture and he wants to be ready in case the in-laws visit.

[1] We were going to make a wisecrack here about some insane wannabe Fellini's taking a shot at Conan the Barbarian or something, but we already had to watch that movie so the joke is on us.

[2] And, to a lesser extent: he should avoid eating refried beans with habanero peppers and okra <30 minutes before bedtime, and liberally apply Preparation-H before becoming a pretender to the throne.