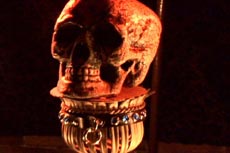 So this is what Skeletor's been up to while he waits for them to do a He-Man movie.Leaping backward in time like a retard chasing a birthday cake, Sam reveals that not only was Scotty his motivation to kill, but also his priest in Satanic rituals. Yup, it was Sam who was drinking the blood. I don't know whose blood, though, since a shot moments later reveals that Tony is, in fact, fine and dandy, penned up in a cell in Sam's basement. There's someone else in another cell, too, but we never learn who it is. We also never see that person again, so just forget I said anything.

Now, despite having not killed Tony, Sam abducts another male escort by the name of Ben. This one, Sam actually tortures a bit, taking off his leg with an electric carving knife. The next day, Ben's live-in himbo, concerned that Ben never returned home, comes looking for him. As the ill-fated himbo wanders through Sam's house, he is suddenly attacked by& Scotty? Well, okay, why not. In any event, Sam soon chops his leg off, too, so he can have a matching set. I'd like to take a moment to point out that Sam tortures his victims to the strains of classical music, just in case you'd forgotten that he's a painful ripoff of Hannibal Lecter. Reminder: he is. 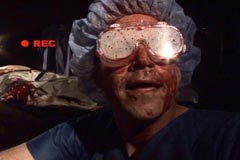 Sam should have gotten the anti-fog murder goggles. Now he just looks ridiculous.At long last, the first day of interviews draws to a close. Just a refresher - these interviews are supposed to take place over the course of a week. We're an hour and twenty minutes in, and it's only the end of the first day. Understandably, this is the point in the movie where I started gnawing on the batteries from my remote control.

Jackie goes back to her hotel and goes to sleep, not bothering to turn off the lights or take off any of her clothing. She's a special investigative reporter, dammit! They don't need comfort to sleep! As you probably saw coming, unless you suffer from some sort of interesting mental& well, let's just say quirk, Jackie has a disturbing dream. In it, she envisions Detective Brennan threatening her with a knife. Suddenly, Brennan turns into Sam. Before things can get too gruesome, Jackie is woken up by the vibration of her cell phone on the bedside table. It's Brennan, calling to tell her there's been a new development in Sam's case. It seems that Brennan just realized the similarities between Sam's victims and a case he worked on twenty years ago, in which a teenager was found burnt to a crisp. Brennan notes that this is exactly the same way that Sam's victims died. Brennan is the worst cop ever. None of Sam's victims were burned in the slightest. Nonetheless, Brennan suggests that maybe there is no fifth victim, and Sam has been leading them on this whole time. Maybe his fifth victim is really his first victim, this teen he may have killed two decades back. A teen& named Scotty! Cue the dramatic music. Hey, that's odd - the dramatic music sounds exactly like thousands of hands slapping against foreheads in frustration! How about that! 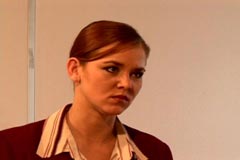 Jackie is definitely in No Guff Mode. Amount of guff taken: zero.A graphic informs us that it is now the day of Sam's execution. Don't get me wrong, I'm absolutely thrilled for the time jump, but what happened to the other five days? Like I said before, the chronology in this movie sucks. Anyway, Jackie sits down with Sam one last time, and this time, she's in control. She tells him she knows about Scotty, and what's more, she's figured out that Scotty didn't actually take part in the murders over the last two years, but he was just an alter ego that Sam created for himself. Man, it's too bad they don't give out a No Shit Prize for Special Investigative Reporting. I mean, it's not like Sam said he saw visions of Scotty materialize out of thin air (he did), or that Scotty used his ghostly powers to inhabit his body (uh huh), and it's certainly not like Sam recorded all of his killings and Jackie watched those videos herself and Scotty somehow doesn't appear in any of them (yup). Goddamn, she's good at her job!

After being called out like that, Sam breaks down and admits to killing Scotty in a fit of passion all those years ago. They were involved romantically, and Scotty had threatened to tell Sam's wife, so Sam strangled him, then burned down his house with Scotty's body inside. Strangled, then burned. That's actually two methods of killing that Sam never used on any of his other victims. Brennan is the worst cop ever. Sam also says that Tony is still alive(!) and that they can find him in a cell beneath his garage. 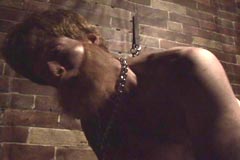 I hope, I hope, I hope that's not his real beard.Jackie and Brennan go to Sam's house, and sure enough, he has a locked storm hatch sticking out of the side of his garage, in plain sight. They bust in and find Tony alive and well, if somewhat shaken. Interestingly enough, while Tony's beard has grown out like a gay Grizzly Adams (which is to say, the only kind of Grizzly Adams), his hair has remained the same length. Also interestingly enough, Brennan missed the storm cellar when they first arrested Sam, doesn't know Sam's last name, and wasted his time chasing after an imaginary fifth victim. If Sam hadn't been so anal (ha!) about recording his torture sessions, I swear the man would still be free. How did the feds know to find him in the first place? Seriously, Brennan is the worst cop ever.

After freeing Tony, Jackie discovers Sam's satanic altar, upon which she finds a note. She reads it to Brennan for his analysis.

Jackie: "Satan is the one we adore. You are the one. We will kill. We will hate. Satan, the blessed almighty."
Brennan: "Sounds almost religious."

So let's see, we've got a title stolen from Kiss the Girls, characters and scenarios taken straight from The Silence of the Lambs, and even a weak game motif plucked directly from the Saw trilogy. The only thing original about Kiss the Boys is how much it sucks. Although a hearty amount of that suckage is the fault of Greg Osborne's non-script and abysmal directing, it would be unfair of me to place the blame squarely on his shoulders. After all, the acting was terrible, too. Jackie's southern accent came and went like a case of herpes. Sam's delivery was so slow, I was almost able to forgive this movie's perversely confusing chronology. Honestly, how long was Sam in jail? It couldn't have been that long, if Tony was able to survive in that cellar without anyone to give him fresh food or water, and yet, judging from his beard, he could have gone to goddamn medical school in the time it took for the police to find him down there. Maybe in a pinch gay people can consume their own gaydar for sustenance, like some sort of fabulous camel. I don't know. What I do know is this: this movie had some of the best music of any movie I've ever reviewed, but that isn't nearly enough to save it from its own crapulence. I tried to lay off the gay jokes a little, but seriously, fuck you, Greg Osborne. Fuck you right up the ass.