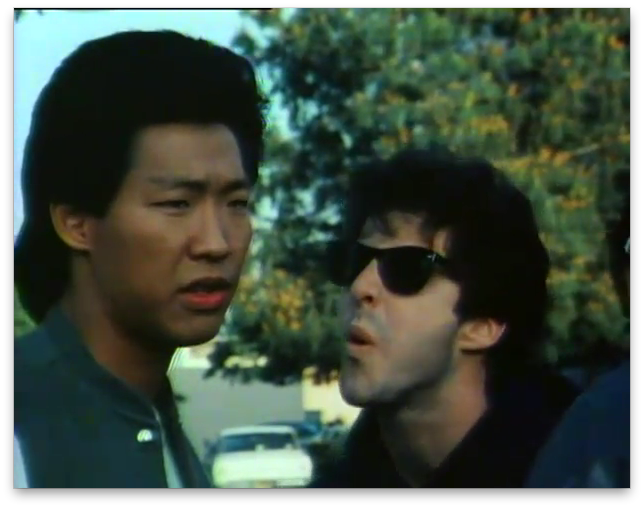 By now you're probably thinking to yourself "wow, what a crazy movie, this sure was a great review that ended just now with that picture," - and trust me, we were more than a little tempted to leave it there ourselves - but believe it or not, there is actually more to this movie than Belly Shirt Guy. Not much more, mind you. Remember those "interesting people" we mentioned before? Well, we were only mostly lying. For example, there's the gang of street toughs who provide their own mood music on a four-foot-long Peruvian flute*:

Unfortunately, most of the movie is far less memorable, as the fights that seem to break out everywhere Tony and Jung go (it's like they've signed up as test subjects for a pheromone that only attracts pissed-off martial artists) are interspersed with various other images that barely register on even a subliminal level. Try to restrain your excitement as Tony has a lame date on a boardwalk! Gaze in awe at a high-school classroom filled with extras who look like they're pushing 40! And we just dare you to stay in your seat for the the birthday party for a character who never appears in the film again! At least some of these scenes were filmed using the parts of the light spectrum that humans can actually see, giving us a brief vacation from the hypnotic nothingness of oblivion.

The director must have realized the film wasn't supposed to be pitch black about halfway through, because he finally takes pity on our neglected rods and cones and decides to shoot the next fight scene at high noon in Death Valley, which is just enough to make what we're assuming is the entire cast visible for a minute or two. Unfortunately, these brief lucid moments mostly consist of a poor man's Andre the Giant peeing on cars:

By this point, Jung is getting pretty tired of nickel-and-dime jobs like attending spontaneous '80s metal toga parties and hanging out in bars drunkenly explaining the concept of synchronicity to random fat guys using pickled eggs and fried grasshoppers. Fortunately, he and Tony, having successfully made a splash in the freelance (belly-)bouncing world, get invited to the house of Some Evil Rich Guy, who offers them a job guarding a "private party" where a bunch of awkwardly shaped people mill around and do mountains of cocaine. Some Evil Rich Guy is obviously both rich and evil because he sits in an easy chair facing away from his guests, surrounded by bodyguards, staring into the fire and drinking a snifter of fake brandy. Also, his living-room floor appears to be covered entirely in linoleum, the spill-resistant adhesive budget tile of kings.

The ancient and deadly art of face-fu.Jung is suddenly hit with either a moral crisis or the need for more cash to fuel his reckless investigations of the human psyche, so he steals a giant sack of money from his blow-gobbling employer. Of course, Some Evil Rich Guy didn't get so Evil and Rich by letting money bags get ganked right out from under his coke-ravaged nose, so Jung gets found out faster than Hamburglar at a police cookout. S.E.R.G. looks up a pair of super elite (and budget-conscious) assassins to hunt him down: Yoshida, the least deadly samurai ever, and Kruger, a man whose extremely specialized martial-arts training only allows him to attack objects and people that are shaped like punching bags and suspended from the ceiling.

If (like us) you were hoping the movie would end with Belly Shirt Guy eating a handful of magic jelly beans, growing to the size of King Kong and destroying most of southeast Asia before finally being beaten back into the sea, we recommend you turn it off and just pretend that's what happened right about now. If (also like us) your masochistic curiosity gets the better of you, don't say we didn't warn you, but as far as we can tell, it actually ends with our heroes getting beaten to a pulp by a mob of mostly invisible people while screaming like mental patients and then laying down in a pile of trash to bleed to death with one of their mothers.

And that's Ninja Turf. The verdict? Well, these so-called 'turf ninjas' seem to have very little - if anything - in common with the loveable little hoodlums from 1993's innovative critical grand slam Surf Ninjas, nor the noticeably less loveable ones from Surf Nazis Must Die, who technically aren't actually ninjas at all but then neither is anyone in this movie so shut up it's a fair comparison.

If you're still dead-set on witnessing Ninja Turf but you want to do so for a reason other than "building tolerance for an upcoming sensory-deprivation endurance trial," you should skip directly to this collection of the very best scenes. Trust us, your brain will thank you later.

*Note: we have absolutely no reason to believe the flute is Peruvian but we had to blame it on someone and Peru seemed like as good a choice as any. So, in other words: up yours, Peru.