Titties is reunited with Block, who decides to make a big hairy deal about how "gravely wounded" his BFF is. He cycles through almost 50% of a facial expression as he details what a big important influence BFF has been in his life, and Titties is so taken by his sensitivity that she almost floods the entire cave system. I'm not sure why Block's whining garners this reaction, considering that his "gravely wounded" friend is sitting up, chatting animatedly, shooting baby animals etc., while all of Block's other troops are getting cozy with Prehistoric intestinal lining.

I guess "gravely wounded" means being able to run at an Olympic sprint, because all three of them dash back into the open and are intercepted by a squad of poorly-rendered raptors. Luckily, Titties comes up a method for quickly and easily disposing of large raptor groups, which works without a hitch. So 90 seconds later, when they are accosted by another raptor posse, BFF takes it upon himself to to sacrifice himself for no reason! Although maybe he's just trying to be the Ultimate Wingman, as his death makes Block very sad and fuckable for awhile.

Block and Titties get to have another tear jerking scene in which they discuss their innermost feelings, pasts, preferred auto insurance providers, etc. etc. etc. on and on and on. Just in case you've forgotten as hard as the screenwriter did: Yes, we're allegedly still watching Raptor Fucking Island, not Dr.Christing Phil. They decide that the best way to survive on an island that is about to explode in a symphony of volcanic death is, of course, to set off a bunch of explosives and prompt it to explode even faster! Fortunately for fans of comedy everywhere, this results in Titties being trapped in a cave-in with Earring -whom we've just learned she really, really hates. This is my favorite scene of the movie, because it almost seems like the writers wanted to say something they found meaningful through Earring:

Earring: Hey bro I didn't just decide to be a terrorist because I felt like it. There are innocent people from my country who are suffering because of some of the negative effects of globalization and stuff, and the only way for me to help them is to--

Titties: SHUT THE FUCK UP YOU CRAZY! YOU'RE A CRAZY CRAZY BAD GUY WHO HAS AN ACCENT!! YOU ARE A PSYCOPATHIC CRAZY MURDERER BECAUSE YOU MURDERED ENEMY SOLDIERS WHO WERE SHOOTING AT YOU BY SHOOTING BACK!! CRAZY KILLER KILLING CRAZYFACE!! BAD!! BAD BAD MAN!! BOOOO!! *smears feces on the walls; eats some termites* 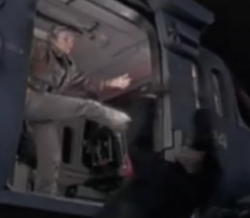 Titties escapes from Earring and is reunited with Block in what I think was supposed to be a passionate embrace, but more resembled a couple of arthritic crabs practicing akido. The movie ends heartwarmingly as our heroes board a chopper, which abandoned them on the island for a very dramatic 30 seconds and then turns around and comes back. A certain effeminate terrorist clings to the rails begging for his life, but Captain and Mrs. America kick him away and smile fondly as he is eaten by a large carnivorous mass of blurry textures.

For all of its heavy implication, Titties and Block never consummate their romance while on the island, leaving their eventual fate after returning to sweet American soil unknown. I still think they enjoyed burning up their sexual while murdering the shit out of some slimy, carrion-eating reptiles. And they got to kill some dinosaurs, too.